By now, many people have heard and probably fell in love with the Shiba Inu but have you heard of the Ryukyu Inu?

No? It’s okay. Not many people have. This breed, along with Tosa Inu and Japanese Spitz, is among the rarest breeds round.

Here is everything you need to know about the Ryukyu Inu, including what they look like and how they behave. 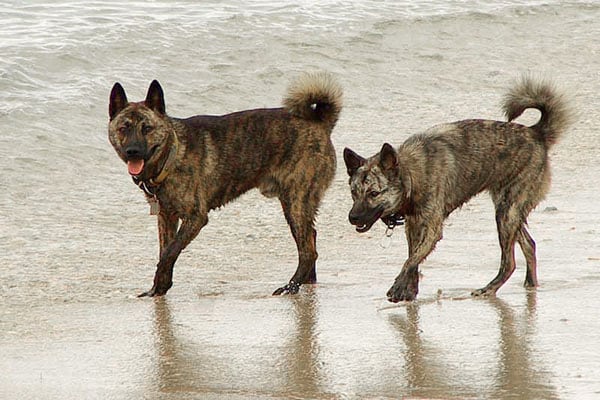 About The Ryukyu Inu

Most Japanese breeds have a long, incredible history. The Ryukyu Inu is no different.

Also known as the Ryukyu dog, Ryukyu Ken, or Turra-in by Okinawans, this pedigree breed hails from the Japanese island of Okinawa.

As of 2015, only 400 Ryukyu Inu exist in the world, and their numbers are slowly dwindling.

It would be upsetting to see such a beautiful and dignified breed fade from existence, especially when they are so tied into the landscape of Okinawa.

How the dogs got there and how they have survived this long is, largely, a mystery.

There are few records of their arrival, and purebred Ryukyu Inu were thought to have gone extinct after World War II.

But, in the 1980s, there was some hope for the breed. Yoshio Aragaki discovered a pack of Ryukyu Inu way up in the Yanbaru mountains.

Scientists quickly went to check it out and discovered that the dogs were purebred Turra-in. Not wanting to see the dogs disappear, Aragaki founded the Ryukyu Inu Hozonkai to protect the breed.

Physical Characteristics of the Ryukyu Inu

They do have liver and red colored coats, too. New colors, due to crossbreeding, have also popped up, including ivory, white, black, and sesame. They have short single, and sometimes, double coats.

Medium-sized, a full-sized Ryukyu Inu stands around 18-20 inches tall and can weigh between 33-56 pounds.  There are little to no variations between male and female dogs.

They have a sleek body that is longer than it is high. Well developed muscles on the hind legs give this breed a speed and grace.

A Unique Feature of Ryukyu Inu

Do you know that some dog breeds develop specialized dewclaws?

The Great Pyrenees and related breeds have dewclaws made for gripping snow and climbing rough, mountainous terrain.

From years of living within the rain forests of Okinawa, where there is a high risk of tsunami / flooding, these dogs have a working dewclaw that would, in essence, allow them to climb trees!

However, only a small percentage of Ryukyu Inu have this working dewclaw today.

The preservation society also hypothesized that the dewclaws assist Ryukyu Inu much like they do with wolves—by helping them slow down while chasing down prey.

As with the Hokkaido Inu, Kai Ken, and Akita,  the Ryukyu Ken is faithful, loyal, and brave. They aren’t afraid of danger, especially when they have you and your family to protect.

However, some people are hesitant of the breed if children are present, as the Ryukyu Inu also share some traits (associated with dogs that were used in dog fighting) with the Tosa Inu, which is banned in 14 countries.

This doesn’t mean the Ryukyu Inu is inherently dangerous or aggressive. It’s just misunderstood. Let’s clear up some of the misconceptions.

Ryukyu Inu are devoted to their masters. With their high level of intelligence, they also seek to be respected.

Train them early and with a clear voice, and you will have a loyal friend at your side, always. They learn quickly, especially when treats and play are involved.

Keep in mind that these dogs are originally hunters, often kept wild, and have a strong prey drive.

Though they have wilder traits than most breeds, they love to socialize and play.

They aren’t as dramatic as the Shiba Inu. Nor are they as aloof.

The Ryukyu Inu wants to be included, not left alone like most Shibas would prefer.

They would rather climb mountains with you than sit in an apartment all day, left to their own devices.

The Ryukyu Inu has has keenly adapted to life on a island environment, where the weather can be dangerous.

They can scale steep mountains, and even some trees!

A large portion of the remaining Ryukyu Inu population has yet to be domesticated.

This makes for a very energetic breed that requires vigorous mental and physical stimulation daily.

Ryukyu Inus are definitely not couch potatoes, so their owners shouldn't be either.

They’re adventurers. Hunters. They love spending time with their owners, but they also want to explore the world around them.

Like most Japanese breeds, the Ryukyu Inu is considered a fairly healthy dog with little to no health issues.

However, breeders are urged to check for conditions like elbow and hip dysplasia, glaucoma, patella luxation, hypothyroidism, and Collie eye anomaly (CEA).

When in the best of health, Ryukyu Inu tend to live for 10-12 years, but there are famous Ryukyu Inu, such as Kai from Okinawa World who lived to be at least 16 years old.

How Much Do Ryukyu Inu Puppies Cost?

Since the Ryukyu Inu is an extremely rare breed that nearly went extinct, chances of finding any puppies available outside of Okinawa is very slim.

Even in Okinawa, there's still ongoing efforts to preserve the breed from the possibility of extinction.

Learning about the history of ancient Japanese dog breeds is fascinating and helps us to understand the origins of the Japanese dogs we know and love today.

We can better understand why Shiba Inus and other Japanese dogs still have a lot "wilder" traits than more domesticated breeds like Goldens and Labs.

And by better understanding the traits of Japanese dogs, we can better provide them with the care, patience, and training they need to become beloved members of our families.