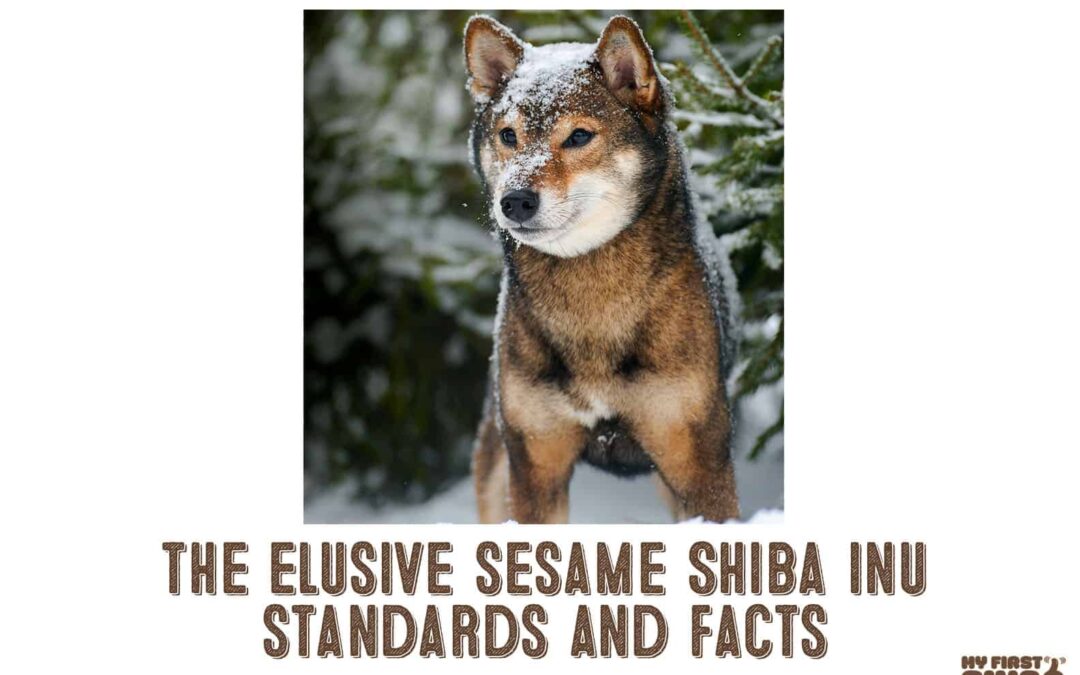 There are also rules for the percentage of coloring amounts throughout the coat and even how each individual coat hair should be colored or "tipped."

The Origins of The Sesame Shiba Inu

All four colors of the Shiba Inus we see today are the result of selective breeding done in the early twentieth century.

Due to factors such as war and illness, the Japanese Shiba dog was at great risk of becoming extinct.

Selective breeding of three different strains of Shiba dogs allowed the breed to carry on to what is known as the Shiba Inu today.

A true sesame Shiba Inu will have a black tip overlay over the red base coat that follows the pattern of a black and tan Shiba Inu.

The black must have an even blending with no black mask's or heavy concentration of black anywhere on the coat.

The one exception in regards to pattern standards is that widow's peak are allowed.

The coat of a sesame Shiba Inu cannot be darker than 50% black.  The black tipped guard hairs must have the correct percentage of black to red and must not be too light or too dark.

Yes, all sesame Shiba Inus can be considered sable colored. However, the term sable is not used in Shiba Standards because while all sesame Shibas are sable, NOT all sables are sesame.

This is because the coat of a sesame Shiba Inu must follow a particular pattern. Other sable colored dogs like German Shepherds have concentrated black markings that would not be allowed on a true sesame Shiba Inu.

If My Shiba Inu Isn't A Sesame, What Coat Color Is It?

If you have discovered after reading this article that your Shiba Inu is not a sesame, don't be disappointed.

Your Shiba Inu is still 100% Shiba and a great dog.  Sesame Shiba Inus are extremely rare.

In most cases, your Shiba Inu is likely to be considered either sable or red with black inserts - "sashige" as the Japanese call it.

This would describe your Shiba Inu if its coat is red with black tipping on its back and tail. In English speaking countries, the term to describe this type of coloring is "dirty red".

The Japanese dog organization does not have a separate category for sables / dirty reds, so they are just registered as reds.

In terms of "favorable" coat coloring for sables, the closer to pure red the better. Sables that have heavy black coloring is considered a serious coat fault.

However, this detail would only concern you if you were considering showing your Shiba Inu in a show ring.

Over a decade ago, a head judge from Nippo advocated to eliminate Sashige colored Shiba Inus from the breed standard.

He wanted the preferred Shiba Inu coat color - clear red - to be emphasized. However this resulted in a decrease in sesames in the show rings in Japan.

Where Can I Find A Sesame Shiba Inu?

Many people mistakenly think that simply breeding a red Shiba Inu with a black and tan Shiba Inu would possibly create a sesame.

That is far from the truth.

Sesame Shiba Inus need a particular type of genotype to be produced.

Coat color genetics is a very complex subject that not many - including experienced breeders - understand completely.

So basically finding a sesame Shiba Inu depends a lot on luck and connecting with the right breeder.

As young puppies, sesame Shiba Inus will not begin to show potential sesame coloring until at least one year of age.

Even then, it will take another year or so until all sesame markings fully develop.