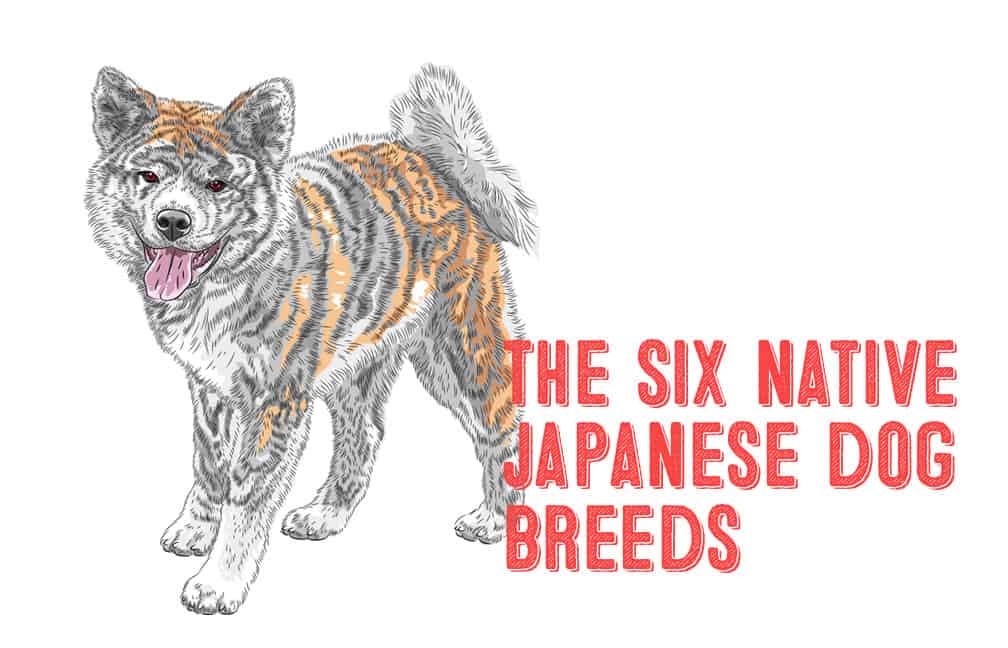 There is no other country in the world most invested in preserving their native dogs than Japan.

While Western influences and War nearly wiped out the native dogs, Japanese dog preservationists, with the help of the Government worked relentlessly to bring back the native breeds to stable numbers. 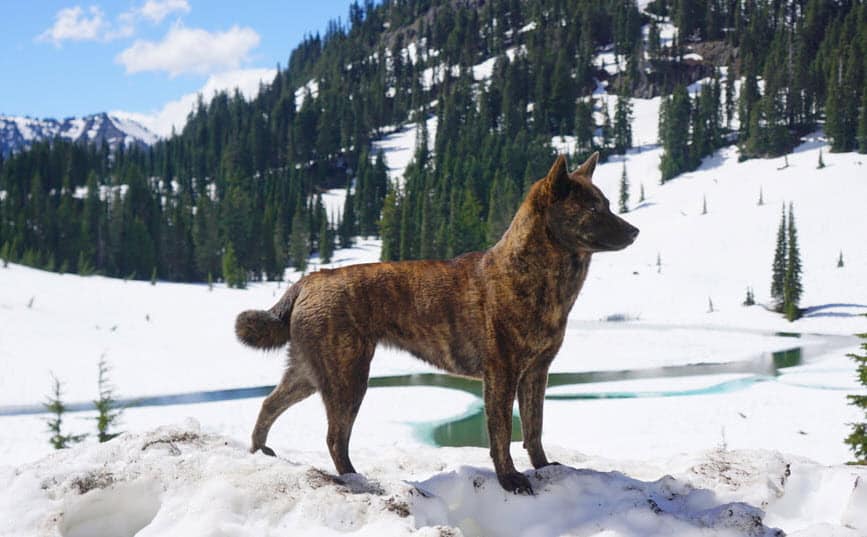 The story of the native Japanese dogs is a fascinating journey of both preservation and evolution ebbed on by the unique geographical terrain.

There are only six dogs recognized in Japan as being true native Japanese breeds. They are the Shikoku, Kishu, Kai, Hokkaido, Akita and Shiba Inu.

The ancient roots of these dogs go back thousands of years all the way to the Paleolithic period.

At first, these six native dog breeds may all seem quite similar in appearance and temperament. But in actuality, each breed has its own distinctive traits however nuanced they may be

Out of the six native breeds the Shiba Inu and the Akita Inu are the most popular. They are also the two breeds that have the least primitive characteristics compared to the other four. 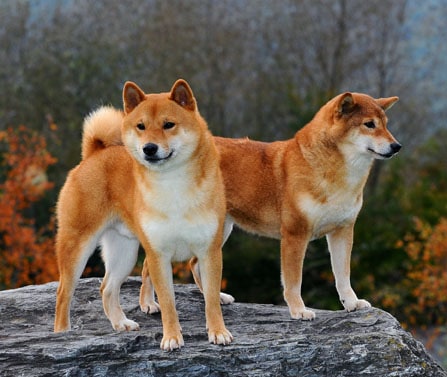 Although not recognized as official native breeds, there are four other popular Japanese dogs breeds that get attention. They are the Japanese Spitz, the Chin, the Japanese terrier, and the the Tosa Fighting dog.

Although these breeds are quite rare - even in Japan - they are still preserved and admired by fanciers in Japan and abroad. 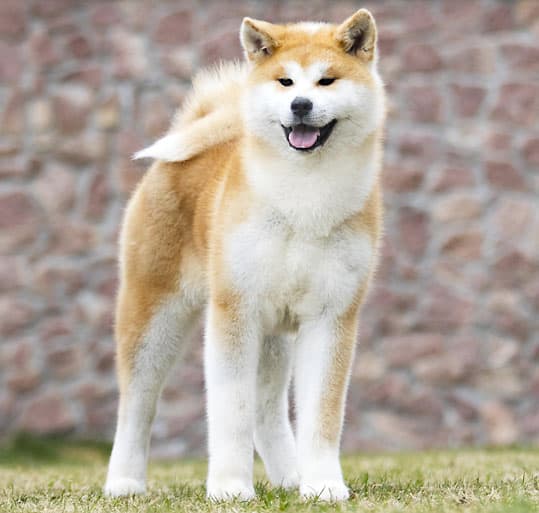 The Akita Inu is the largest of the six native Nihon Ken and the only dog in the large category. In fact originally all Japanese dogs were only small to medium sized.

The Akita Inu originated from the Akita region of Japan and were originally medium-sized bear hunting dogs.

They were used extensively as fighting dogs and to increase their size and power - were crossed with Mastiffs,Tosas, and western dogs  in the mid-19th century.

The Akitas size increased, pushing them into the large category, but at the expense of losing most of it’s original Spitz type characteristics.

War and disease caused more problems for the Akita and almost led them to extinction.

Fortunately, with much difficulty and effort, Japanese Akita preservationists were able to mainly restore the Akita Inu to it’s original pure strain.

Currently, the Akita Inu is still very much a rare breed - even in it’s own country.

Acquiring an Akita Inu outside of importing from Japan is possible but very expensive. In fact, Akita Inus are known to be one of the most expensive dog breeds to purchase.

Learn more about the differences between Akitas and Shibas here. 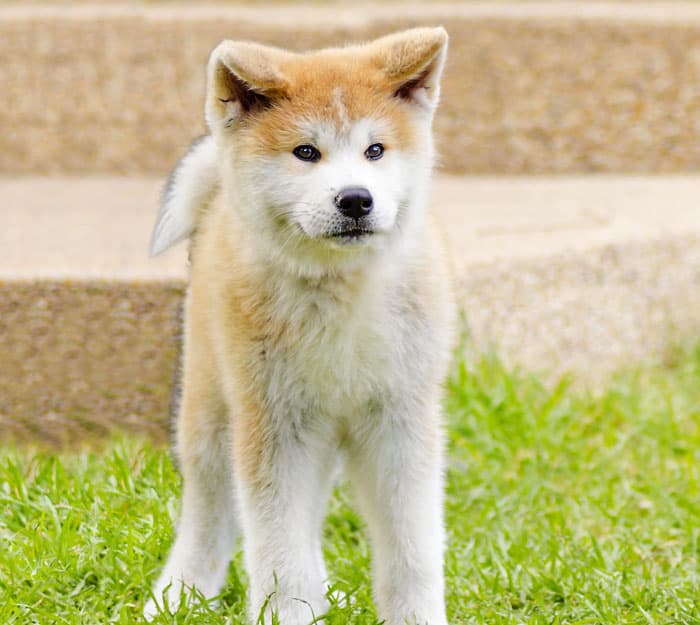 The Akita is an independent, confident, and reserved dog. They are loyal and protective of their family members - almost to a fault.

The sheer size and dominating nature of Akitas make them suitable only for certain dog owners who can understand and manage a primitive breed type dog like an Akita.

Akitas are a territorial breed and like many other primitive breeds, do not cohabit well with members of the same sex.

Socialization and early training is essential for the health of the Akita as well as for the safety of the human family members.

While well trained and socialized Akitas should be behaved and unaggressive - some poorly trained Akitas can be aggressive and dangerous if not managed properly.

In the U.S, and certain other countries, Akitas are labeled as dangerous dogs which can impede an owners choice of housing.

Of the six native Japanese dogs, the Hokkaido dog or Hokkaido Inu is thought to have more of the older genes originating from the earliest of their ancestors - the original Jomon dog.

The Hokkaido Inu is mostly known to the Japanese as the Hokkaido Ken or Hokkaido with the word Ken simply translating to dog.

Because of the frigid temperatures of the Hokkaido region, Hokkaido dogs have a thicker outer coat and a denser undercoat. The harsh environment also allowed the Hokkaido to have larger paws and smaller ears to deal with snow and the unforgiving bitter cold.

The Hokkaido was bred to be a fierce hunting dogs, capable of handling small bears with ease. The indigenous Ainu people revered their “bear” dogs for their unwavering loyalty, bravery, and hunting ability.

Although rarely used in bear hunting today, organizers of dog shows in Japan still show captive bears to the Hokkaido to test their “bear” drive.

This storied hunting past has produced a Hokkaido that still shows tremendous physical fortitude, alertness, and keen judgement.

Temperament wise, the Hokkaido is strong-willed, wary of strangers and fiery at times. They are also sensitive dogs and with the right training can be very obedient dogs.

However, like the other six native Japanese dogs, Hokkaido’s are usually “one-owner” dogs and can display both human and dog aggression.

Hokkaido’s forge strong bonds with their owners and require attention and affection from their master. Although not typically a barking dog, the Hokkaido is known to howl or sing in delight upon the return of their master.

Learn more about the Hokkaido dog here. And here. 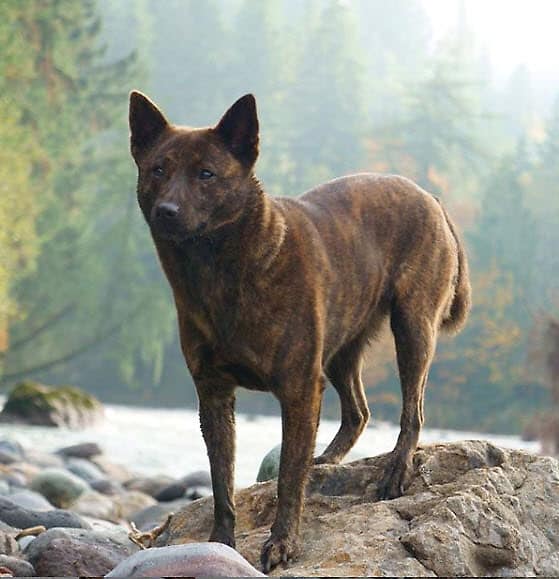 The Kai dog is the most unusual looking of the Japanese native dogs due to their striking brindle coat.

Their brindle coat also allowed the Kai to have the coolest nickname, “tiger dog” stemming from the Japanese word for brindle torage, or tiger fur.

Although the Kai like the Hokkaido is classified as a medium sized dog, some argument has been made about the two dogs being slightly too small for the medium category.

Due to the isolated and inaccessible region of their origins, the Kai’s dog bloodline has remained virtually untouched and pure.

The Kai was bred to be a superb hunter of mountain antelope, wild boar, deer, and pheasant. The hunting families survival largely depended on their hunting dogs ability to track and kill game.

Today, this hunting instinct largely remain with the Kai being alert, quick thinking, and ready to pounce at an moment. 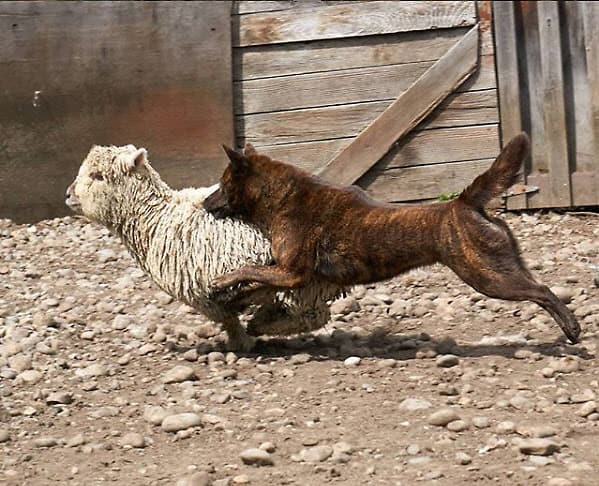 The temperament of a Kai dog is similar to the other native dogs - independent, loyal - but fierce.

It has been said that a Kai will fight to death in order to protect it’s master. And although a Kai might look wild, they are said to be highly perceptive and sensitive to their owner’s feelings.

Thanks to national and prefectural government protection, the Kai is one of the few native dogs to remain mostly unaffected by World War II. The government even offered tax incentives to owners of Kai dogs in order to protect their national treasures. 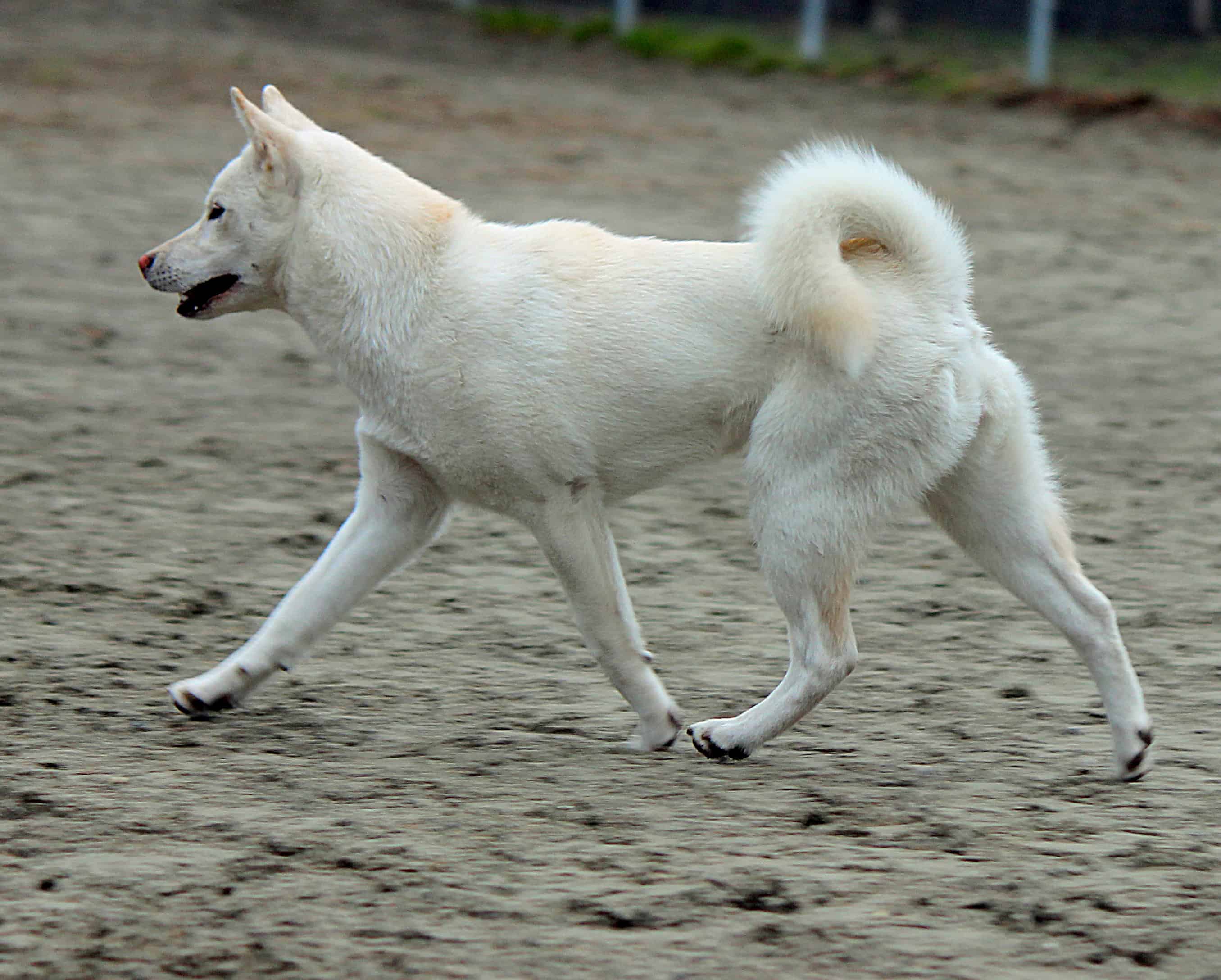 The Kishu Ken is the most popular native Japan dog breed in the medium-sized category. However, even in Japan, Kishu is still quite rare.

The Kishu is the Japan dog that is most often used in modern day hunting.

Although Kishu originally had coat colors similar to other native dogs, nearly all of today’s Kishu are white. This occurred when breeders heavily breeded the Ouchiyama line of white Kishu.

The Ouchiyama Kishu were remarkable hunters despite being easier to see by prey. This disadvantage was counterbalanced by the fact that hunters had an easier time tracking their Kishu.

The hunting prowess of the Kishu made them treasured family members of hunters for centuries. Painting from over seven hundred years ago show depictions of hunters with their Kishu dogs hunting wild boar.

This reverence for their dogs and the fact that they were situated in isolated mountains helped the Kishu to survive World War II relatively unharmed.

Out of the medium-sized Japan dog breeds, the Kishu is slightly heavier with more developed muscles.

The Kishu is a natural athlete with a strong desire to hunt. They are powerful, fast, and keenly alert at all times.

Temperament wise, they share the same traits as the other Nihon Ken - independent, aloof, and one-owner dogs. They are thought of as to be a bit more friendly than the other native breeds.

Yet, the Kishu is also known to quiet, cunning predators patiently waiting for prey to appear.

The Kishu is similar to the Shikoku due to the two breeds having primitive, wolf-like characteristics. There are legends and lores that say that both Kishu and Shikoku were descended from wolves as well.

These two breeds also have the purest bloodlines due to the isolated region of their origins.

The Shikoku is the most wolf-looking of the Japanese dog breeds - and the rarest.

As with the Kishu, many legends tell of the Shikoku being descended of wolves. Most believe this is just a legend. These beliefs most likely arose simply due to the Shikokus wolf-like appearance and the fact that wolves lasted longer in Shikoku compared areas of the country.

Both the Shikoku and Kishu were chosen by NIPPO to form the basis of the standards of all Japanese dog breeds.

The Hata line Shikoku had a stockier, heavier build and thicker, longer coats.

The Hongawa line on the other hand tended to be slimmer with an elegant build quality.

The Hongawa line of Shikoku was deemed to be the most preferred and became what we know as modern day Shikoku.

There are four accepted coat colors, sesame, red, black/tan, and white. White is not a desirable coat color, therefore heavily penalized at shows.

Learn more about the differences between a Shikoku Inu and a Shiba Inu here.

The Shikoku is a high energy dog that needs extensive physical and mental stimulation. They like all the other native dogs, are independent thinkers and can be standoffish and even aggressive to strangers.

Shikokus form strong bonds with their owners and are a bit more willing to please their owners compared to the other Japan dogs.

However, they still definitely have a stubborn streak and needs a master that understands the needs of a primitive dog breed.

There are virtually no Shikoku outside of Japan, except for a few breeders scattered throughout the world. 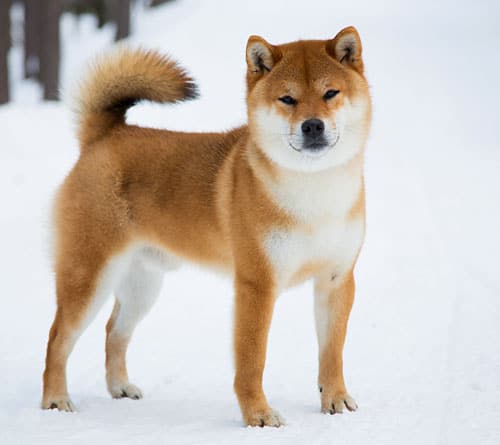 The Shiba Inu is the smallest of the native Japan dog breeds and is the  sole member in the small-sized category.

By far, the Shiba Inu is the most popular of the native breeds due to their looks and size.

With male Shiba Inus reaching only 17 inches and 22 pounds, the Shiba seems to be almost the “perfect-sized” dog. Not to big. Not to small.

Shiba Inus possess a compact, muscular, and almost perfectly balanced body. They as all the other native breeds were originally bred as hunting dogs and to this day still possess the hunting instinct.

Shiba Inu coat colors include red, sesame, black and tan, and cream. The red is the preferred and most popular color while the cream is least desirable.

The Shiba is also the only native dog not named after it’s geographical region. This was due to the fact that modern day Shiba Inu was bred from a number of Shiba-type dogs in different regions. 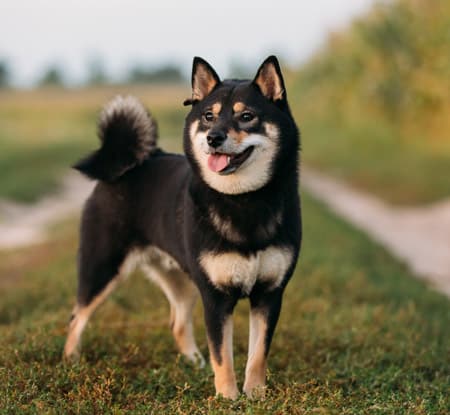 World War II was not kind to Shibas and the breed nearly faced extinction.

Their efforts paid off, and today the Shiba Inu is the national dog of Japan and a source of great pride for Japan.

The Shibas popularity outside of their county has been steadily growing as well.

Shiba Inus are very popular on the Internet due to viral meme, cute puppy videos, and popular social media Shiba Inus like Marutaro and Bodhi, the Menswear dog.

Don’t let looks fool you though.

Like the other native breeds, Shiba Inus can be aloof, stubborn, and difficult to train if not socialized early.

Though compared to the other native  breeds, Shibas are the most “domesticated” and display less wild characteristics.

Some Shiba Inus can actually be quite good couch potatoes and spooners. 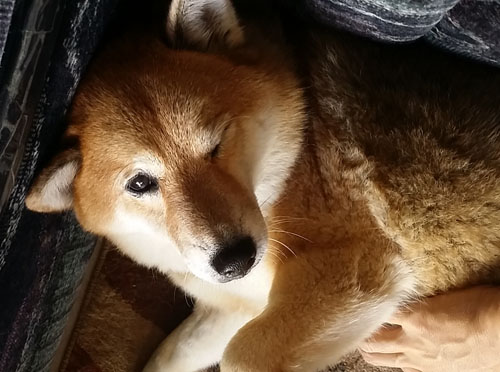