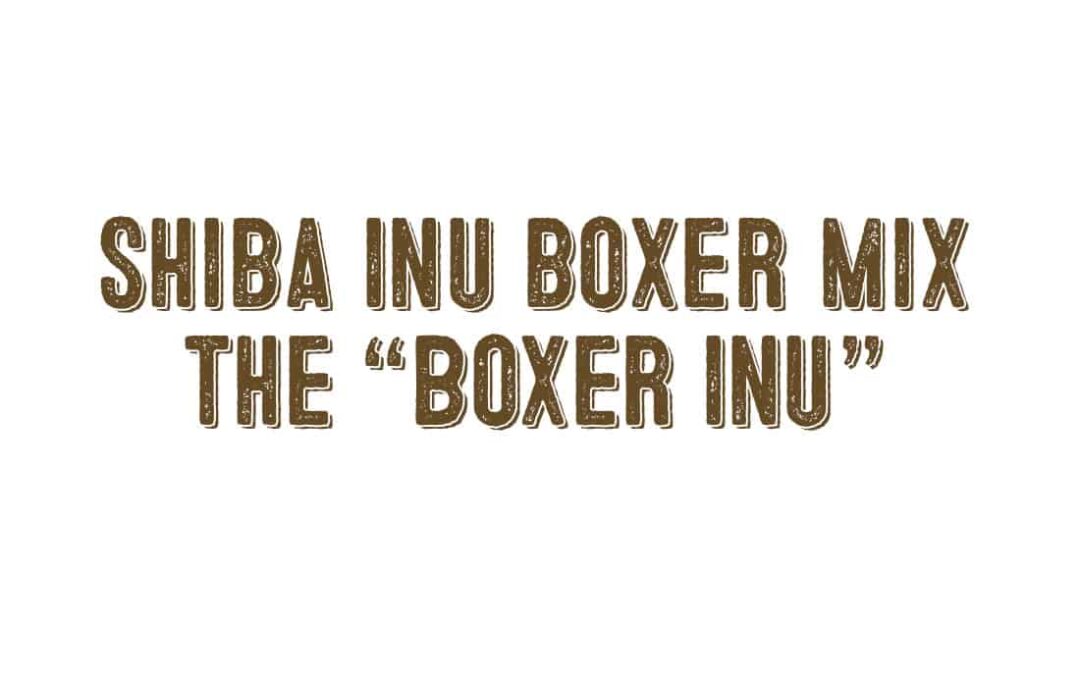 The Shiba Inu Boxer or "Boxer Inu" is an unusual, likely accidental, crossing of a Shiba Inu and Boxer dog.

Although unusual, Shiba Inu Boxer mixes are a truly unique blend of personality, energy, and playfulness.

This is one mixed breed that is going to keep you moving and laughing, but you are going to need to make some adjustments to your home.

Is the Shiba Inu Boxer mix right for you and your family? Let’s find out.

Understanding what makes each parent breed unique can help you be a better dog parent for your mixed breed friend.

As with all dogs, early socialization and obedience training is crucial to their behavior later on.

Because Boxers tend to have a boatload of energy, extra training and fun activities are a must early on.

Boxers and Shiba Inu dogs are both highly intelligent, inquisitive, and can solve problems on their own.

A Shiba Inu Boxer mix puppy is going to grow up with a curious mind that could get them into trouble.

Dog puzzles, obedience and agility training, plenty of exercise, and even acting as therapy dogs are all roles a Shiba Inu Boxer mix can take on.

That said, you can never let a Shiba Inu Boxer mix off the leash to run free. Both dogs were bred to hunt wild game, and Boxers will tend to chase anything that moves.

Shiba Inus are also known escape artists, so having a Boxer Inu will require vigilant handling at all times.

The good news is that being mixed with the slightly more reserved Shiba Inu tamps down on some of the Boxer excitably.

This is why Boxer Inus should have active owners that are able to meet the physical and mental demands of this active dog.

Physical Characteristics of a Boxer Inu

A Boxer Inu will typically be a bit smaller than your standard Boxer.

Paired with the sturdy Shiba Inu, a Boxer Inu will have a muscled upper body along with legs that are a bit longer than a typical Shiba Inu.

A Shibu Inu Boxer Mix will lose some of the foxiness in the face. Instead, you will have a smaller forehead, shorter snout, and wider face. The eyes may also be spaced farther apart.

However, this depends on how the genes of both parent dogs are expressed. Some Shiba Inu Boxer dogs may grow up to retain most of their Shiba Inu appearance, minus longer legs, a thicker neck, and larger ears.

The most noticeable blend of physical characteristics will be in the face, since Boxers and Shiba Inu have differently shaped snouts.

Their coats are also different, meaning that a mixed breed will be a coin flip.

Puppies of Shiba Inu and Boxer parents often end up with a shorter double layer coat that retains the coloring and marking of the Shiba Inu parent.

Health of a Boxer Inu

A Shiba Inu Boxer dog has an estimated life expectancy of 10-14 years.

If your Shiba Inu Boxer mix has inherited the shorter Boxer coat, they may have a decreased tolerance for heat and cold.

Don't leave them outside for extended periods of time, and if you go for a walk in inclement weather, make sure they are wearing a coat.

Common health conditions that may show up in this mixed breed include:

What happens when you combine an active dog with a high prey drive (Shiba Inu) with another high-energy, excitable breed (Boxer)?

You'll likely get a energetic pu that requires a tremendous amount of exercise every single day.

While a Shiba Inu Boxer mix isn’t going to have quite the exuberance of a purebred Boxer, this dog will not be as chill as a Shiba Inu either (and as most Shiba Inu owners know, they either have all the chill or none).

Boxer Inus will need regular exercises and walks to stay grounded. They should enjoy daily walks especially if nature is involved.

If you also give your Shiba Inu Boxer pup some mental stimulation with games and puzzles indoors, they will be less likely to become uncontrollably hyper or destructive.

Hopefully, you've learned more about what to expect with this type of mixed Shiba.

The main things to consider is that  these dogs are going to require an extensive amount of training, mental stimulation, and exercise.

They are not going to be the best dogs for smaller apartments or more sedentary pet parents.

But if you are willing to spend a lot of time playing with your furry friend, a Shiba Inu Boxer will be the playful, friendly guardian your household will adore.