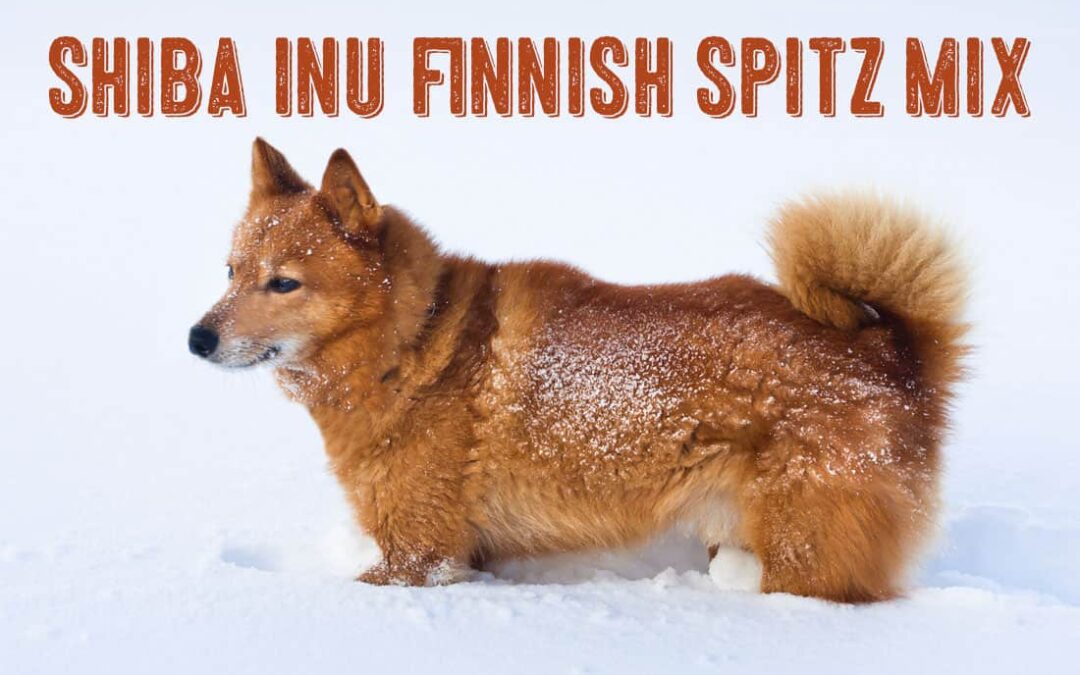 Some mixed breeds, even though accidental, seem to be matches made in Heaven!

Case in point: a Shiba Inu and Finnish Spitz mix. Since both breeds of dog are from the Spitz family, it makes sense that a combination would result in overwhelmingly adorable puppies and beautiful personalities.

Is a Shiba Inu Finnish Spitz mix the companion you have been looking for?

We have everything you need to know about this mixed breed to figure that out.

Both Shiba Inu and Finnish Spitz (sometimes called Finkies) are lovable with their families, and the more comfortable they are with you, the more their unique personalities shine.

The common personality point between both Shiba Inu and Finnish Spitz—their cat-like qualities—are definitely going to come out in a mixed breed puppy.

Furthermore, both purebred Shiba Inu and Finkies can be obstinate, manipulative, and domineering when they want to be in charge.

Expect a mixed breed to display the same personality traits, if not double the tenaciousness.

For this reason, you'll need to spend a lot of time socializing and training your pooch.

A Shiba Inu Finnish Spitz mix is going to be incredibly perceptive and will pick up on the slightest uncertainty in your voice.

Food is an excellent motivator for this mixed breed, but they will likely grow tired of training if it goes on for too long.

However, if you train your Shiba Finkie early on, they'll be an exceptional addition to an active family.

This mix will be extremely affectionate around their pack, but they also won’t be afraid to stand up to strangers they deem threatening.

Interestingly, Finnish Spitz are bark hunters, meaning that they bark a lot to communicate with the pack while hunting prey.

In other words, you can also anticipate a Shiba Inu Finnish Spitz dog to be very vocal about their wants and needs.

If you want a dog who is going to communicate with chirps, yelps, barks, and lots of tail wagging, this mixed Shiba may be a great match.

Otherwise, the barking might be seen as a distraction in a more reserved household. Cats may be a better option in this case.

Physical Characteristics of a Shiba Finkie

Side by side, a Shiba Inu and Finnish Spitz have many physical characteristics in common.

Both commonly have red or rust colored fur.

Shiba Inus have shorter coats than Finnish Spitz, but both are double-coated, meaning shedding will be in your future.

Both have curled tails (though the Shibe’s curl is tighter), pricked triangular ears, thick necks, and stocky trunks. This is why they're often described as “fox-like” in appearance.

Shiba Finkies will most likely come out as red, cold, or red sesame in coloration, since Finnish Spitz only have red and gold fur. The coats will either be short or medium in length, reminiscent of a long-haired Shiba Inu.

Since Shiba Inu are slightly smaller than Finnish Spitz, a Shiba Inu Finkie mix is going to stand between 13.5-18 inches tall and weigh between 20-30 pounds in most cases.

Health of a Shiba Finkie

The life expectancy of a Shiba Inu Finnish Spitz mix is between 13-15 years. Thankfully, both breeds are considered very hearty and resilient dogs.

There are few health conditions that a mixed breed would be susceptible to, meaning that as long as you keep up with necessary vaccinations and vet care, your Shiba Inu Finnish Spitz companion will be a part of your life for many years.

The Shiba Inu side of your mixed breed pup loves going on daily walks but isn’t inclined to hyperactivity.

The Finnish Spitz side of the mix, however, was bred to be on the move all day long, prowling through dense underbrush for small mammals. This means a Shiba Finkie should have loads of stamina for physical activity and a strong prey drive.

Your household will need a secured yard with no ways of getting out. With a high prey drive and appetite for adventure, Shiba Finkies can pose a run away risk.

However, you should never leave your Shiba Inu Finnish Spitz alone inside or outside for extended periods of time, regardless if they are on a run or free to move about the fenced in space.

Doing so can cause separation anxiety, as both Finkies and Shiba Inu tend to bond very deeply with their human pack.

Overall Shiba Finkies will require a moderate amount of daily activity and will consider even a short daily walk a great reward.

Mental stimulation in the form of puzzles and play is also very important for the well-being of all dogs.

Hopefully, you now know that the combination of a Shiba Inu and Finnish Spitz would be a gregarious and enthusiastic furry companion for many households.

As long as you can commit a certain amount of time to physical activity and grooming to your Shiba Inu Finnish Spitz mix and a fenced in yard, these dogs are great for small or large families.

While they may not get along with smaller animals, they are generally great around children and other dogs.

Therefore, if you're looking into adopting Shiba Inu Finnish Spitz mix, there's no reason not to!