Just discovered what an English Bulldog/Shiba Inu mix looks like and it made today a little better so here ya go pic.twitter.com/vQ81Yoqu1I

​The Shiba Inu Bulldog mix is a 'designer' dog mix and has 50% Shiba Inu and 50% Bulldog. Designer dog mixes, although popular in the past (think Labradoodle), have come under increased scrutiny as more awareness is being shed on the designer dog breed business model.

Many designer dogs are bred by backyard breeders and puppy mills that pay little attention to the quality and health of their dogs.

Because designer dogs are a mixture of two separate dog breeds, unscrupulous dog breeders have a much easier time getting away with breeding low quality puppies that usually have serious health and behavioral issues.

Although we would never condone designer dog breeding we do advocate for rescue. The information provided here is to provide knowledge to those who already have a Shiba Inu mix, rescued or otherwise. ​

A Few Facts About Shiba Inus And English Bulldogs

The Shiba Inu, also known as the Japanese Shiba Inu, is a medium sized breed of dog that hails from Japan.

The descendant of the ancient indigenous dogs of Japan, whose history spans far beyond recorded history, these independent and feisty dogs are treasured the world over for their unique personalities and fox-like appearance.

Bulldogs, on the other hand, could hardly have different roots! Originally bred in England in the 1800’s to assist in bullfighting, the Bulldog has come a long way from their violent origins and is now widely regarded as loving and gentle family pet.

Since the two breeds could hardly be more different, what would Shiba Inu Bulldog mix puppies look and act like? And is there any good reason to purposefully breed them together? Of course, the answer begins with "no," but these types of breedings do unfortunately occur. 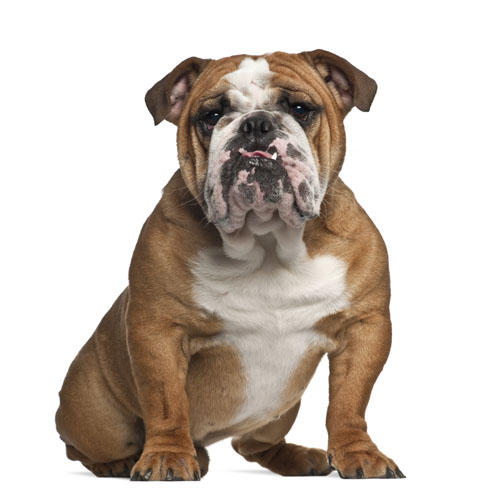 Shiba Inus are prized for their somewhat curious personalities. They are a little more cat-like than most breeds: they are fiercely loyal yet very independent, as well as snuggly with their owners but reserved with strangers.

Bulldogs, on the other hand, have moved far from their origins as bull baiters and are now docile and friendly family pets.

Bulldogs have a tendency to be stubborn and willful, but are generally loving and sometimes goofy dogs.

A Shiba Inu Bulldog mix puppy is likely to be very tenacious, thanks to the independent and somewhat stubborn natures of both the Shiba Inu and the Bulldog. Both breeds are very friendly and loving with their owners, are Shiba Inu Bulldog pups will be no different!

Whether or not a Shiba Inu Bulldog mix will be gregarious with strangers is a bit of a tossup- some of them may be a little bit more reserved like the Shiba Inu, while others may be indiscriminately friendly like the Bulldog.

Others may fall somewhere on the spectrum of friendliness and will be discerning but ultimately cheerful with people they don’t know.

Bulldogs and Shiba Inus are extremely different dogs in terms of physical appearance. The sleek foxlike face, elegant form, and plush coat of the Shiba Inu stand out in sharp contrast to the bulky, muscular and jowly appearance of the bulldog.

Shiba Inus are a bit smaller than Bulldogs, at least when it comes to weight. While Shiba Inus tend to be a little taller than the average Bulldog (14-17 inches tall at the withers as opposed to 12-16 inches), they weigh a great deal less. A male Shiba Inu should weigh no more than 18-24 pounds, while a fully-grown male Bulldog will easily weigh in at 50 pounds.

Shiba Inu Bulldog mix puppies will grow to be anywhere between 25-30 pounds, and will be between 14- 17 inches tall.

Shiba Inu Bulldog Mixes will retain some of the jowly appearance of the bulldog, but the wrinkles will be less pronounced than those of a purebred Bulldog. They will have wrinkly foreheads, upturned triangular ears, and perhaps a few wrinkles around their mouth and neck.

The snouts of Shiba Inu Bulldog puppies will be shorter than that of the average Shiba Inu, but will not be completely flat like that of the Bulldog.

Color wise, Bulldogs tend to be white and brown, while Shiba Inus come in a variety of different colors (also occasionally mixed with white.) It’s hard to predict what color individual puppies will be, as the genetics of canine coloring are complex and depend entirely on the pigment of the individual parents involved.

However, it’s a safe bet that most Shiba Inu Bulldog puppies will be either brown or red with white mixed in.

Purebred Shiba Inus are generally pretty robust. While they can suffer from a few genetic illnesses, mostly allergies, hip dysplasia, and glaucoma, they are much less prone to issues than the Bulldog.

Unfortunately, Bulldogs are known for being susceptible to a variety of genetic and environmental illnesses, due mostly to their stout, heavy, bodies, drooping eyes, and flat snout.

However, it is also possible for Shiba Inu Bulldog puppies to suffer from a variety of genetic illnesses common in both parent breeds. Shiba Inu Bulldog mixes are especially prone to eye issues, such as glaucoma, as ocular problems are well documented in both Bulldogs and Shiba Inus.

While both breeds are often adopted for their unique appearances, their personalities are so different that it’s unlikely that a Bulldog aficionado would be happy with a Shiba Inu as a companion animal, and vice versa!

While some of the genetic health issues present in both breeds may be alleviated by mixing the two breeds together, there are no guarantees that a Shiba Inu Bulldog mix will be spared some of the genetic predispositions to illnesses of their parent breeds, so that hope alone is not a good enough reason to breed them together.

Shiba Inus and Bulldogs were bred for different purposes in different parts of the world and molded over the years to be two completely dissimilar dogs, even in terms of personality.

Bulldogs are docile, stubborn, loving and gregarious, while Shiba Inus are independent, intelligent, and selective with their affection.

While Shiba Inu Bulldog puppies are likely to be adorable and wonderful (just like all puppies), the two breeds are best appreciated independently and should not be purposefully bred together.