A Shiba Inu Samoyed mix is a definitely a dog that is able to capture attention.

Crossing a foxy or wolf-like dog with another fluffy fox-like dog easily equates to an adorable and fluffy foxy looking dog.

When considering adopting or rescuing a Shiba Inu Samoyed mix, it is important to consider your ability to care and handle this unique dog.

Because of this, Shiba Inu Samoyed mixes need a lot of weekly or daily grooming to keep their coat un-matted and healthy.

Additionally, due to their thick double coats, this Shiba mix would thrive better in environments that are not too hot.

Still interested in a Shiba Inu Samoyed mix? Read on to learn more.

The generally friendly and happy disposition of the Samoyed should meld well with the more aloof, independent, and sometimes "grumpy" Shiba Inu.

In a perfect world, the Shiba Inu Samoyed mix would be balanced dog that is friendly, but not too "clingy". However, as even with purebreds, dogs do not always inherit expected personalities or temperaments. 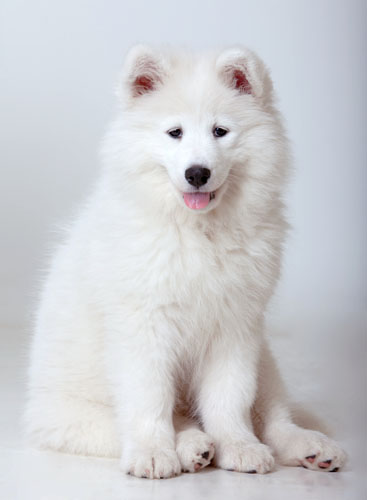 Both Shiba Inus and Samoyeds can have a stubborn streak. They are both highly intelligent dogs that require patient and positive training.  Due to their sensitive nature, negative reprimands should not be used during training as this could cause the dog to shut down and become unresponsive to future training.

​Both Shiba Inu and Samoyeds have strong prey drives - especially for small prey. A Shiba Inu Samoyed mix is not a dog to be trusted off leash as both of these breeds have a tendency to wander.

​A Shiba Inu Samoyed mix should be given regular exercise as well as mental stimulation. A Samoyed was bred to be a working dog and thus needs a lot of physical activity to stay grounded and content.

A bored Shiba Inu Samoyed mix can become destructive and anxious. Samoyeds are known to dig holes in the ground if they can't find anything better to do.

The Shiba Inu Samoyed mix is a medium to medium-large dog with a thick medium to long double coat.

Visually, the Shiba Inu Samoyed mix is a very stunning dog with its wolfy like appearance and smiley grin that is common in the Samoyed breed.

This Shiba mix typically weighs between 30 - 40 pounds and has a maximum height of around 19 inches.

Grooming is a big part of this dogs regular care due to its thick coat. These dogs will shed or "blow" all of their soft undercoat twice a year. During these times, daily brushing is essential to prevent matting. Aside from the twice yearly shedding, these dogs do shed year round - but in much smaller quantities.

There is a genetic test to screen for this disease.

A Shiba Inu Samoyed mix could suffer from the following health issues:

The Issue With Designer Dogs​

Crossing two pure breed dogs together to produce a "designer" dog has become popular of late due to media attention and the sheer novelty of having a designer dog with a fancy, schmancy name like "Cock-a-Poo", etc.

However there is a dark side to the world of designer dogs which involves puppy mills, poor quality dog specimens, and dogs filling up shelters. Read more about these issues here.

True Shiba Inu fanciers do not advocate the mixing of Shiba Inus with other breeds of dogs. These Shiba Inu advocates believe that the Shiba Inu already possess a natural body of refined stature that should not be crossed with anything else.

​Some designer dog advocates argue that crossing two breeds together promotes more genetic diversity and thus healthier dogs. However, there is no valid scientific proof to this.

Furthermore, breeders that typically breed designer dogs are amateurs. (It's much easier to hide breed imperfections in designer dogs vs. pure bred dogs). These breeders are mostly motivated by profit and do not understand breeding for healthy genes in the first place.

Should I Get a Shiba Inu Samoyed Mix?

The decision to chose any particular dog breed whether it is a purebred, a mix, or a rescue is a highly personal decision. This type of decision is highly dependent on your unique circumstance and preference. We here at My First Shiba Inu do not advocate for the breeding of designer dogs in general.

We do however, always advocate for the rescuing of any dog in need.

There are already so many 'designer' shelter dogs in need of loving homes.

If however you are set in getting a specific type of designer dog - check the credentials of the breeder. Do they do extensive health and genetic screenings? Do they take their purebred dog stock to conformation shows, etc?

We write these informational articles on Shiba Inu mixes because many of our readers already have a designer dog mix and would benefit from these type of articles.