A Shiba Inu Yorkie mix is considered a "designer" dog breed mix which is basically two purebred dogs bred together.

Designer dog breeds are not without controversy - and rightfully so. Many times, designer dogs are bred by inexperienced backyard breeders and puppy mills.

While we at My First Shiba Inu do not support unethical dog breeding practices, we do understand the need to provide information about various Shiba Inu mixes.

Read on to learn a little more about the Shiba Inu Yorkie mix.

Yorkshire Terriers, as their name implies, are a small breed of companion dog that originates in the United Kingdom.

These spunky little dogs are very popular, and can be found all over the world. They make excellent lap dogs, but they were originally bred to be vermin hunters (if you know any Yorkies, this probably won’t surprise you!)

Developed during the 19th century in England, Yorkshire Terriers were first imported to the United States soon after.

While they were used originally for hunting small vermin such as rats and mice, Yorkies are much better known for their exceptional ability to be great pets! They were immensely popular in England as lap dogs, and once they were brought to the United States they continued that legacy.

In fact, they are the 7th most popular breed in the United States according to the American Kennel Club.

Shiba Inus have a bit of a different history. Also originally bred as hunting dogs in Japan, Shibas are now more commonly kept as house pets. However, they have never reached the same level of popularity as the Yorkie, due partially to their more particular temperaments.

So, what would happen if we mixed the tiny Yorkie and the foxlike Shiba Inu? 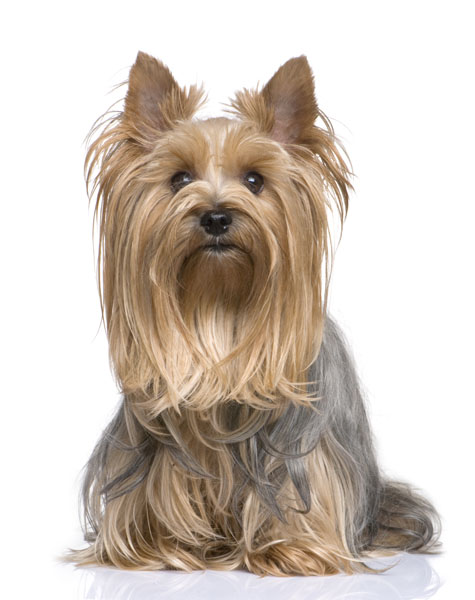 While neither the Yorkie nor the Shiba Inu are known for being particularly mushy dogs, that’s pretty much the only thing they have in common. Personality wise, the two breeds could hardly be more different.

Shiba Inus are independent dogs with almost cat-like personalities. They tend to bond to one person (their owner), and are often diffident with strangers. While they can be very outgoing and amusing, they are different from many breeds of dog in that they aren’t indiscriminately friendly. Self possessed and confident, Shiba Inus are a picture of canine dignity!

Yorkies, while they also have a tendency to be closest with their owners, are a little bit different. Active, affectionate, and possessive, Yorkies are a bit shriller than the Shiba Inu. They don’t generally have a lot of patience with children, and while they require very little human assistance while out on the hunt, as pets they generally want a lot of attention!

Yorkies make excellent lapdogs, both because of their size and their loving personalities. In fact, they are very popular companions for the elderly.

A Shiba Inu Yorkie mix will be an independent little dog, but will want a lot of love and attention from their owner. They won’t be a good breed for families with young children, but will thrive with an adult master. They will likely be very affectionate with their primary caregiver and friendly with immediate family, but less outwardly warm with strangers on the street.

A Shiba Inu Yorkie mix will be an extremely intelligent and trainable dog, thanks to the cleverness of both parent breeds.

Yorkies are very small, rarely weighing over seven pounds. Some varieties of Yorkie, particularly the controversial “teacup” Yorkie, can even weigh less than four pounds! Yorkies come in a variety of colors, mostly lighter colors mixed with steel blue (which is almost grey.) Most commonly, Yorkies are tan with a blue saddle. They have long, flowing hair, which is sometimes cut when they’re kept as simply as pets.

Shiba Inus are a great deal taller and heavier and can weigh up to 22 pounds. They come in a variety of colors, including red, black, and cream. They have plush, short coats and a curled tail, along with almond shaped eyes and erect ears.

A Shiba Inu Yorkie mix will likely be brown, black, and white, though it depends largely on the colors of the parents. Some puppies will retain the plush coat of the Shiba, but more likely they will have slightly longer hair (though no where near as long as a purebred Yorkie!)

Because erect ears are dominant in both breeds, a Shiba Inu Yorkie mix will have triangular ears that stand up straight.

Unfortunately, Yorkies suffer from quite a few genetic health problems. Very tiny Yorkies are more susceptible to organ difficulties, especially liver problems. Yorkies are known for having delicate digestive systems, and are prone to other issues such as cancer, bronchitis, cataracts and dental issues. While some of these issues are due to their small size (and extremely tiny Yorkies are more susceptible than ones that grow up to be a little larger.)

Despite all these issues, Yorkies have remarkably long lifespans- some have been known to live to be over 20 years old!

In general, Shiba Inus are a bit more robust. While they suffer from some health issues such as allergies, glaucoma, and hip dysplasia, they generally are a healthy breed and can live between 12-15 years.

A person who decides to add a Shiba Inu to their home will likely be very different than a person who chooses a Yorkie. So why would anyone purposefully breed a Shiba Inu Yorkie Mix?

Well, we’re not exactly sure of the exact motivations of persons doing this - but we do know that we prefer keeping these two special breeds separate.

Since Yorkies and Shiba Inus can both be feisty, independent and loyal dogs, there is really no reason to breed the two together.

While all breeds of dogs are the result of careful mixing of different breeds, most dogs were created to serve a purpose, whether it is hunting, swimming, or as companion animals.

Nowadays, though, there is really no reason to breed a Yorkie and a Shiba together, as both breeds should be appreciated on their own merit.

The feisty Shiba and the lovable Yorkie are better off treasured separately!

However, if a Shiba Inu Yorkie mix is in need of adoption - that's an entirely different story.

We advocate for adoption and rescue 100% and those that choose to adopt are true dog angels.