Shiba Inus of Japan – All of Your Questions Answered 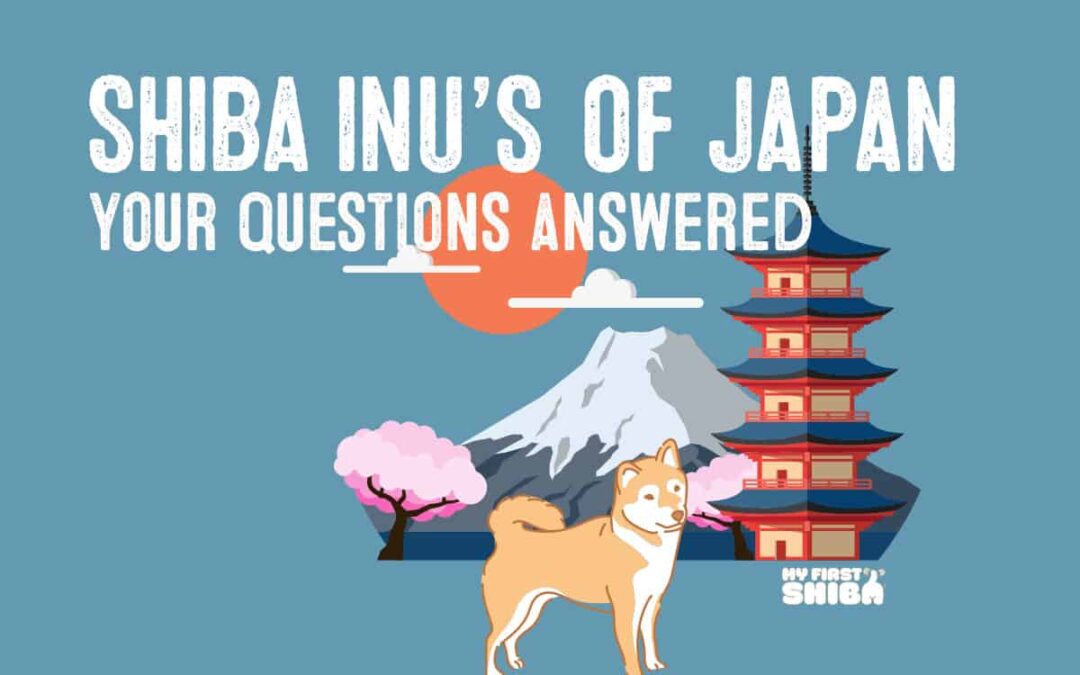 The Shiba Inu is a relative newcomer to North America and many of you have questions about the origins of Shiba Inu.

This post tackles the most common questions regarding Shiba Inus and their home country of Japan. 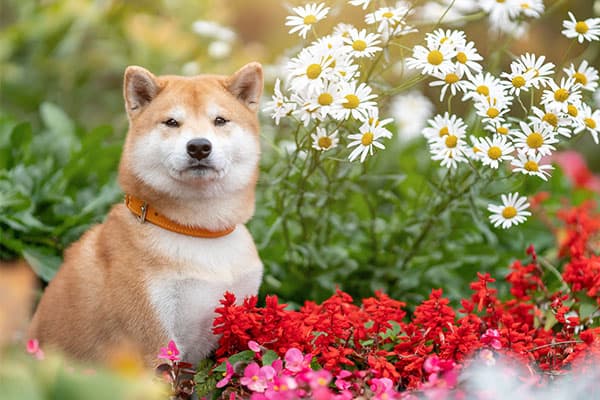 Are Shiba Inus Common in Japan?

The Shiba Inu is the national dog of Japan and a beloved treasure to the Japanese people.

However, they’re not actually as common as you might think they’d be - especially in the metro areas.

On my last few visits to Japan that lasted at least three weeks, I witnessed only a handful of Shibas on my daily excursions throughout the towns and cities of Tokyo, Kyoto, Osaka, and Hokkaido.

This is likely attributed to the fact that apartment sizes in metro Japan are painfully small.

It's likely that having a dog in this type of environment would not be ideal.

The best way to see lots of Shibas in Japan would be to attend scheduled dog shows, as well as dog events that occur throughout the year.

Also, there’s likely to be more Shibas located in rural areas where land and houses have ample extra space for the addition of a fluffy, four-legged furr ball.

Even finding Shiba Inu themed merchandise is a bit difficult.

One of my Japan trips fell on the “Year of the Dog” and despite that, I was surprised at the lack of Shiba stuff to buy.

It seems that the Japanese are equally fond of cats as finding cat-themed merch was quite easy. 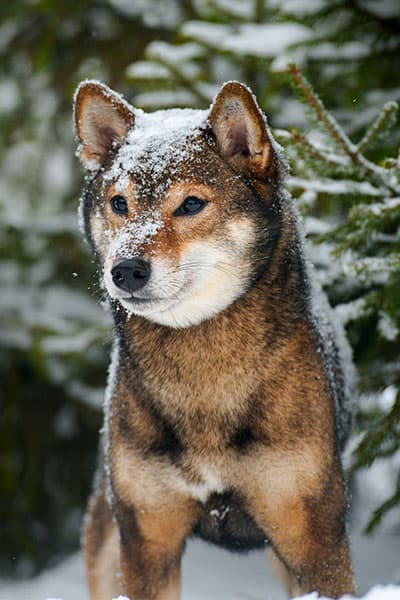 Are Shiba Inus Cheaper in Japan?

In general, Shiba Inu puppies directly from Japanese breeders are about the same or sometimes a bit cheaper than the best North American Shiba Inu breeders.

Like everything, there’s always wide variations in costs due to where the puppy is being sold from, quality of the puppy, etc.

Unfortunately, just as in North America, Japan has a lot of “puppy stores” that sell live animals at the same place they sell dog food.

And just like in North America, the puppies at puppy stores are not the best quality despite the usually very high price tags ($3,500 - $5,000)

To those fortunate or “unfortunate” enough to live in rabies-free areas, importing any live animals will cost a lot more and take a lot more time and effort to accomplish. 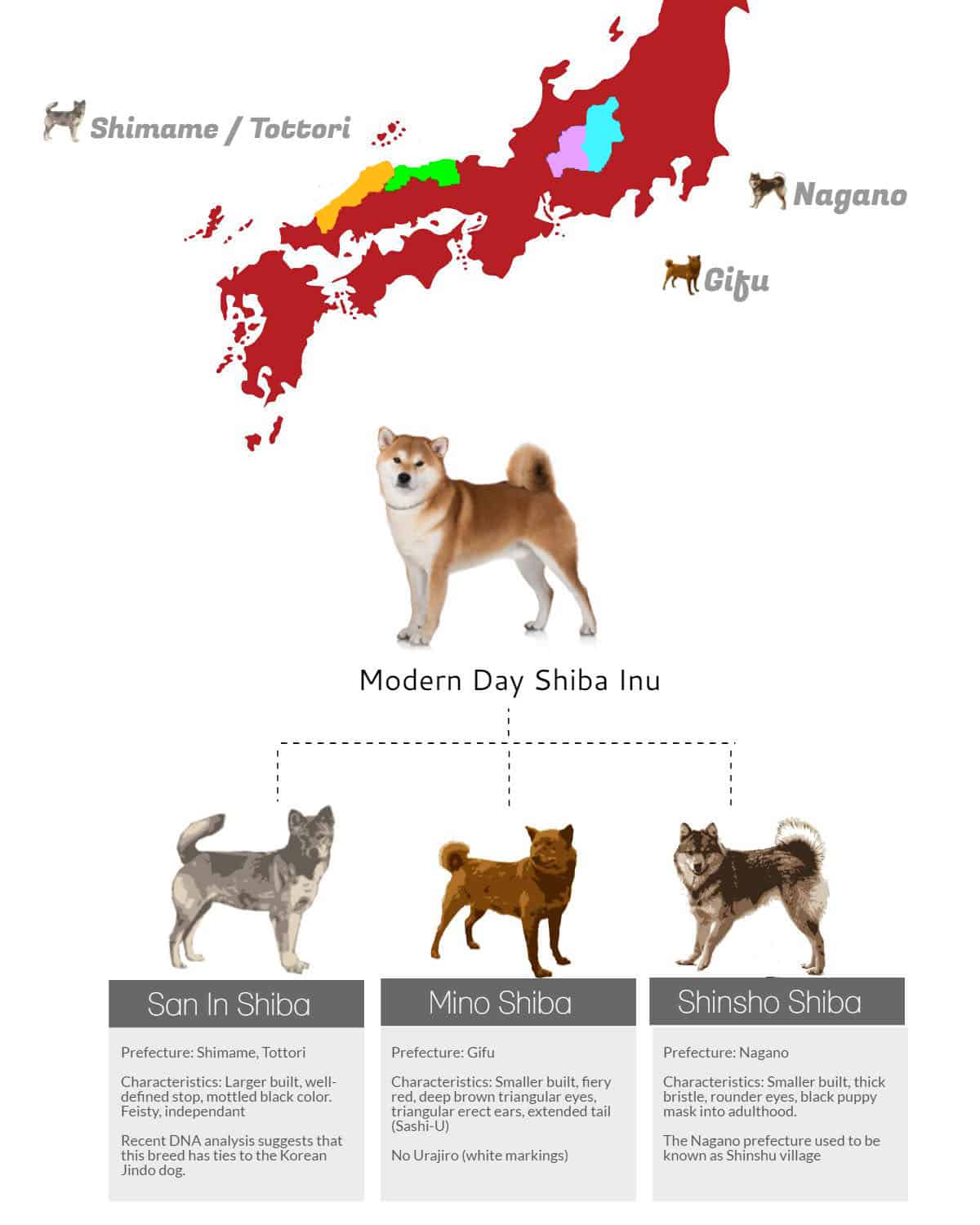 Did Shiba Inu Originate From Japan?

Shibas Inu are one of the 6 original native dog breeds of Japan.

The others being the Shikoku, Akita, Hokkaido, Kishu, Kai.

The history of the Shiba Inu dog breed stretches way back into time. Way back.

It is thought that the ancestors of today’s Shiba Inu immigrated with earliest immigrants traveling to Japan around 7,000 BC.

Those “Jomon” dogs were interbred with another wave of immigrant and immigrant dogs sometime during the third century B.C.

These breeding produced dogs that shared similar looks with today’s Shiba in terms of being medium-sized, having prick ears, and having a “fox-like” appearance.

Shiba Inus originally were made up of three distinctive breeds from three different regions of Japan.

They were the San-In, the Mino, and the Kyushu.

When World War II reared its ugly head, the consequence of war decimated many of the populations of native Japanese dogs - to a point of near extinction.

Thankfully, a Japanese preservation movement managed to save most of the breeds including the Shiba Inu by incorporating various methods such as interbreeding the three Shiba Inu breeds to become the Shiba Inu that we know and treasure today. 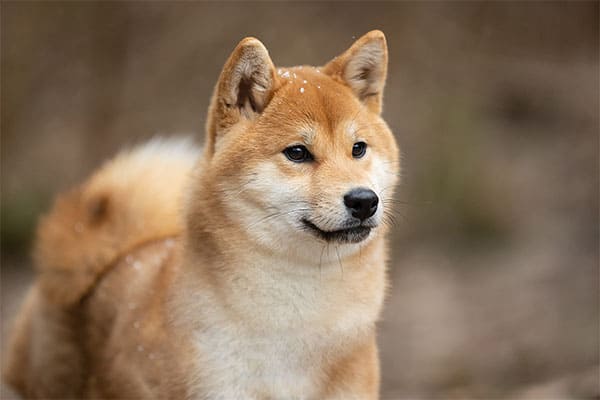 There are a few theories on the origin of the term “Shiba”.

The word Shiba goes back a long way and one of the most popular theories is that the term Shiba is meant to depict the brushwood brushes where the Shiba hunted to flush out wild birds.

The second theory is that Shiba is the word to depict the red color of the Shiba’s coat which has the red brushwood leaf color.

Additionally, the word Shiba may translate to small in Japanese - though now that translation is obsolete.

Put all these theories together and most academics studying the Nihon Ken refer to Shiba Inus as the “little brushwood dogs”. 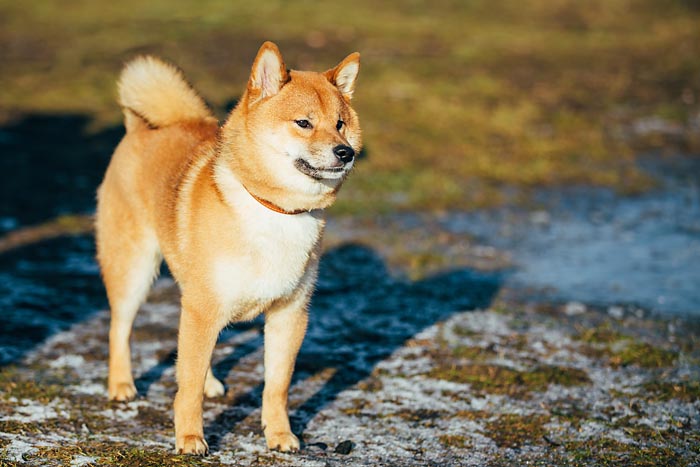 Were Shiba Inu Used as Hunting Dogs in Japan?

Yes, Shiba Inus and other Nihon Ken dogs were definitely used as hunters of small game such as wild fowl, rabbit, etc.

But that was a loooong time ago.

And although hunters likely did use Shibas for hunting in the past, other Japanese dog breeds like the Kishu, Shikoku, and Kai were used much more often than Shibas.

Yet fascinatingly, most Shibas still retain that natural instinct from so many centuries ago.

Many Shiba Inus enjoy chasing critters such as lizards, birds, squirrels, etc. They really dig it.

However, this hunting instinct, albeit muted - also contributes to their likelihood to dash out and flee.

This is why obedience and leash training is an important - basically a critical part, of your Shibas upbringing.

Safe and happy Shibas are Shibas that are trained not to bolt, trained to stay, and trained to come when called. 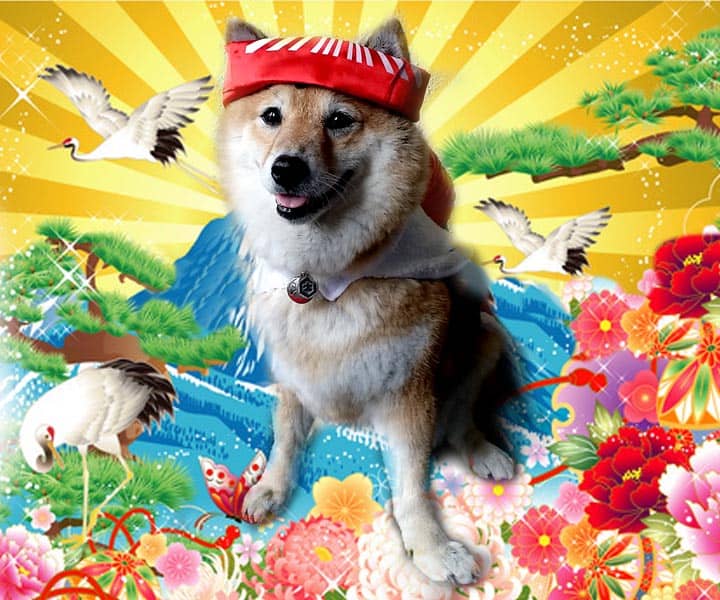 Are Shiba Inus Popular in Japan?

Shiba Inus are officially the national dog of Japan so they are definitely known and loved by the Japanese people.

In fact some of the most popular dog Instagram accounts belong to Shiba Inu owners living in Japan.

The most famous of course being Marutaro. His I.G. continues to delight his 2.5 million followers around the globe. There’s even a Marutaro store located in Bunkyō-ku Tokyo.

From kimonos, to flowery hats, to ingenious rain coats, Shiba Inus in Japan are quite the superstars.

But more importantly, in addition to keeping their Shibas well threaded, the Japanese Shiba Inu owners give great respect and care for their beloved Shiba Ken

Just by following a few of IG’s of Shiba Inus from Japan will offer you a glimpse into how Japanese Shiba Inu owners honor and show deep respect all the way to the sad time that they must cross the Rainbow Bridge.

So Shiba Inus are indeed popular in Japan, though popular might not be the best word.

Shibas are “too cool” to be simply popular. Their mighty dignified and noble character requires much more than social media likes.

It’d be better to say that Shiba Inus are deeply revered by the Japanese people. 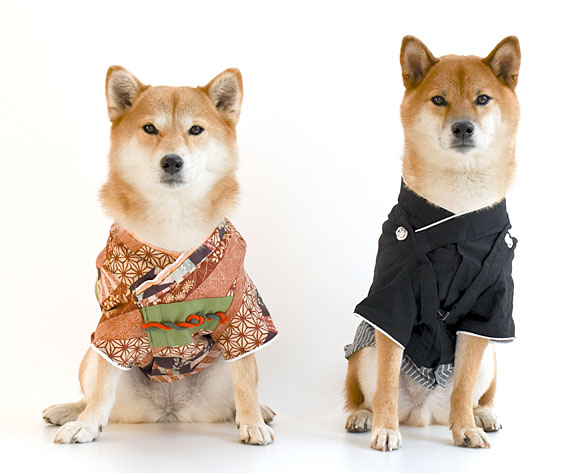 For instance in Japan, the Japanese people value cleanliness and do not wear “outside” foot wear inside the house.

Which by the why, totally makes sense right?

So for this reason, most breeders in Japan keep all of their dogs in outside kennels.

Aside from that, dog breeders in Japan have a straight-foward, no-nonsense attitude of their kennels unlike the more holistic and nurturing views shared by their North American colleagues.

In America we love, adore, and cherish our animals, especially our domesticated pet family members.

There are countless laws aimed at protecting these animals from any type abuses.

In Australia, there’s a law that limits how many hours a Koala can “work”. (basically stay awake at a zoo-type setting, etc).

In Japan, the attitude towards animals is a bit more apathetic.

You’ll easily witness that if you visit any of the zoos in Japan, or the countless pet “stores” hawking all types of puppies in tiny cages just like merchandise.

This is not to state that the Japanese abuse their animals, etc. - but rather a commentary on how different cultures practice and have different beliefs, values, and systems.

This difference in culture is sometimes uncomfortable for other cultures to understand and respect.

So it’s likely that the cultural view of the treatment of animals in Japan is still in a state of evolution.

With that said, the overwhelming majority of Japanese dog breeders don’t treat their dogs as “pets” per se - like how most North American breeders do.

Dogs from breeders in Japan are almost never tested for health or genetics.

They don’t live in the house, but usually kenneled outdoors.

Japanese breeders rarely provide any form of training or socialization except when being paid to get the puppy ready for showing in the ring.

Additionally many Japanese breeders do not routinely vaccinate their dogs nor provide the dogs heartworm medication, flea treatment, etc.

So what does this mean?

Well it mainly means that Japanese dog breeders are knowledgeable and good at what they do when it comes to standards and breeding practices.

However, that's about the extent of what most breeders do.

This could be one of the underlying factors to why Shiba Inus are often labeled “primitive” and not very social.

Most good breeders know the importance of temperament and how proper breeding and socialization can drastically improve the temperaments of their bloodline.

Most Japanese breeders don’t put much focus on that.

So just keep that in mind if you’re planning to import a Shiba Inu from Japan.

Now don’t take this point solely as criticism but rather just an explanation of cultural differences.

You’ll likely be able to find a very beautiful Shiba Inu puppy in Japan, because as mentioned earlier, the breeders there know what they are doing.

And the majority of them do it very well.

And maybe in the future, breeders in Japan will take a more holistic view of their program and include practices to improve living standards, as well as to address the emotional and mental needs of their dogs.

Also, this is not to say that 100% of Japanese breeders fit this generalization.

Of course there are some breeders that really do go the extra mile and half for their dogs In Japan.

But they are the exceptions and not the rule

The relationship between the Shiba Inu and the Japanese people is special.

Shibas are a national treasure and much revered for the dog's loyalty, intelligence, and unique temperament.

Ryosei: Good nature matched with gentle disposition (one can't exist without the other)

Soboku: Modesty with a refined and open spirit

In the future, Shiba Inu aficaniodos including myself would hope that the reverence for the Shiba Inu would play an important role in improving conditions and breeding protocols for all of the animals in Japan.