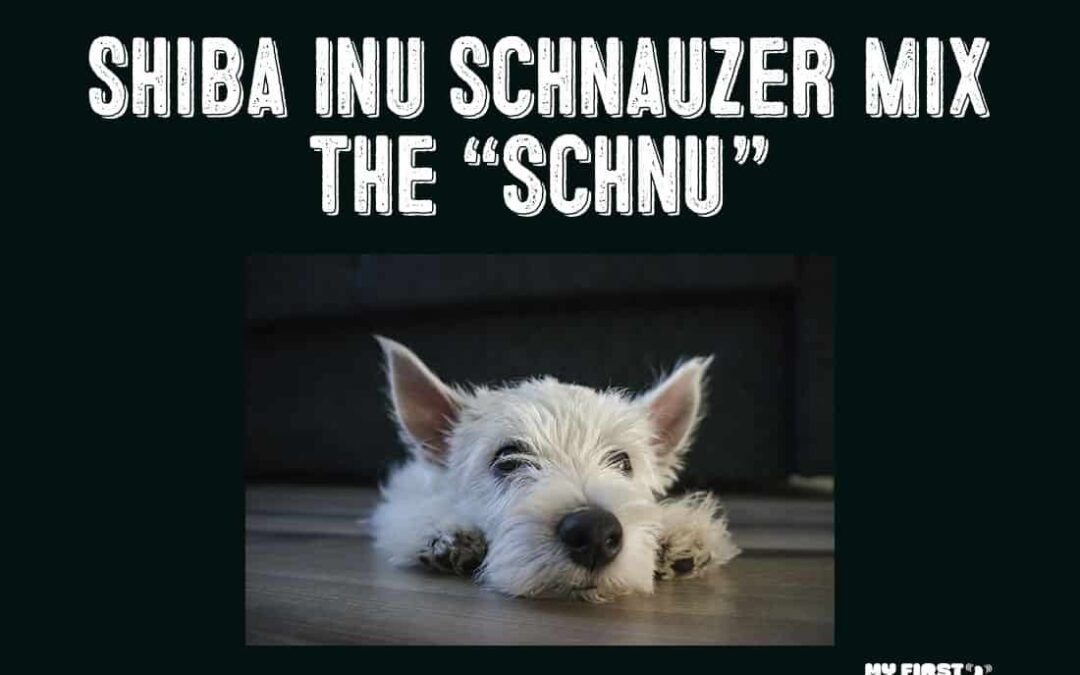 A Shiba Inu Schnauzer mix is a cross between "sometimes" comical Shiba Inus and spunky Schnauzers.

The Shiba Inu Schnauzer mix is referred to as the Schnu, and it is a scrappy pup that makes for a good protector and physically active friend.

Think a Schnu is right for you? We’ve got the details you need to decide.

Because Shiba Inus and Schnauzers have such different personalities it's likely going to be a coin flip on which trait dominates the Schnu.

It could be the cat-like selective personality of the Shiba Inu or the energetic friendliness of the Schnauzer.

Furthermore, Miniature Schnauzers tend to have a wide range of available personality traits.

Some encapsulate what it means to be a terrier—grit, energy, and stubbornness—while others are more mellow and mild-mannered.

What does that mean for a Shiba Inu Schnauzer mix? It means their personality is going to be one of two things: exuberant and dramatic or affectionate but serious.

The drama queen side of the Shiba Inu blends well with the spunk of the Schnauzer, so many Schnus end up pursuing jobs in comedy (kidding). This mix is comical, though.

Playful, energetic, and intelligent, the Shiba Inu Schnauzer mix is going to love games of tug and fetch as much as they love joining in on your morning jog.

The Schnu is going to want to be a part of your family, and they will enthusiastically partake of the attention you give them.

When it comes to introducing your Shiba Inu Schnauzer mix to strangers, don’t be surprised if they act standoffish, timid, or even suspicious of the new person. They may bark when a stranger knocks on the door, too.

Strange dogs of the same sex may also pose issues, but once they have been properly introduced, your Shiba Inu Schnauzer mix will do well a dog park.

You'll need to socialize your Schnu puppy early on. Despite Schnauzers being friendlier with strangers than Shiba Inu, there is a chance that this dog has a high prey drive.

Smaller pets should be introduced to your Shiba Inu Schnauzer mix early on, as should older children.

That said, this mix is very adaptable to different kinds of households and lifestyles. Many of them also enjoy car rides.

Physical Characteristics of a Schnu

Considering that the Shiba Inu and miniature Schnauzer are both similar in size and stockiness, you can anticipate the weight of your Schnu to be around 13-25 pounds, depending on their gender.

Your mixed Shiba will likely inherit the foxy face and dark brown or black eyes. The coat may curl slightly, but reddish or black fur is common between both parent breeds.

Some Schnus have a beard, though it will be shorter than that of their Schnauzer parent.

Additionally, the Shiba Inu Schnauzer mix might have folded ears, but again, this depends largely on genetic expression.

Depending on which way the coat leans, your Shiba Inu Schnauzer mix will either be a light or heavy shedder. If the coat leans more towards the Shiba Inu side, anticipate routine grooming.

Some Shiba Inu Schnauzer mixes end up with wiry coats, though most are dense and fluffy.

The shape of the face will be a cross between both breeds. The head is narrower than a Shiba Inu but also wider on the sides.

The ears are slightly canted off to the side in most Schnus, though they might also fold over or be permanently pricked and triangular.

Enjoying pretty good health, Schnu's will have a life expectancy of 12-15 years,

Since both parent breeds are generally considered healthy and resilient dogs, routine veterinary care is often enough to ward off most medical conditions.

Proper diet and exercise is also essential to making sure your dog lives a life that is long, happy, and healthy.

With that in mind, here are some of the common health issues Shiba Inu Schnauzer mixes may face:

The Schnu is an alert, energetic, and curious mixed breed and will do best with an active family.

Daily exercise and mental engagement is crucial in maintaining their physical and emotional wellbeing.

That said, the Shiba Inu Schnauzer mix is also highly adaptable. They don’t need a large fenced in yard to be happy.

Country living or a city apartment, these dogs are happy spending time with their owners.

Providing them with a space to run around and chase a ball, however, is going to make most Schnus infinitely happy.

Keep in mind that Shiba Inu Schnauzer mixes should never be allowed off the leash when not in a fenced-in area. They won’t be able to resist the impulse to chase after smaller creatures.

Ultimately, Schnus will make great family pets and would be so grateful to be adopted into a good home.

Whether you live in an urban area or out in a rural town, Shiba Inu Schnauzers can make do as long as they are with the people they love.

This mixed breed does well with single people as well as families with children, and they will watch out for your family around the clock.

Despite their energy, Shiba Inu Schnauzers really just crave time and affection from you, making them incredible companions for people who live on the road as well.