Yet, there are a few rarer breeds in Japan that the rest of the world knows little about. 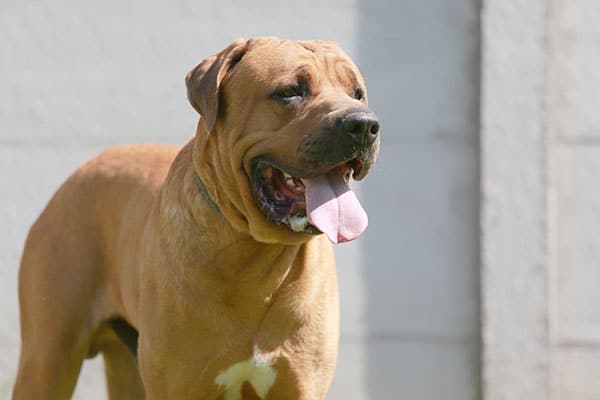 One of those breeds is the formidable Tosa Inu, also known as the Japanese Mastiff. Tosas became known during the 19th century and were seen alongside the Samurai.

The Tosa Inu is a misunderstood breed with a fascinating history.

You most likely may never see a Japanese Tosa in person—for reasons that we will discuss later—but knowing more about dog breeds never hurts!

The History of the Tosa Inu

No one really knows exactly when the Tosa Inu, also known as the Japanese Mastiff came to be known, but most believe the Tosa first appeared in the Shikoku Islands 1860.

The Tosa Inu is a mix of several European breeds, including the St. Bernard, Bull Terrier, Mastiff, Great Dane, and English breed, as well as the Akita.

In fact, the Tosa is still an evolving mix that is not generally pedigreed in Japan.

This unique blend of dogs forged a breed that is astoundingly powerful, resilient, and fierce.

In Japan, the Tosa is called the Samurai dog or the Sumo wrestler of the dog world because of its size and strength. Venerated and loved, a Tosa Inu sent to battle is dressed in the same amount of regalia as a Samurai headed to war.

And with such emphasis placed on this breed’s prowess in a fight, it’s no wonder that the Tosa has found itself in the fighting pits.

Japan, unfortunately, has a long history of dog fighting, and the Tosa was the prized fighter.

The country made dog fighting illegal in some districts, but, thanks to the Yakuza gang, it hasn’t been snuffed out completely. 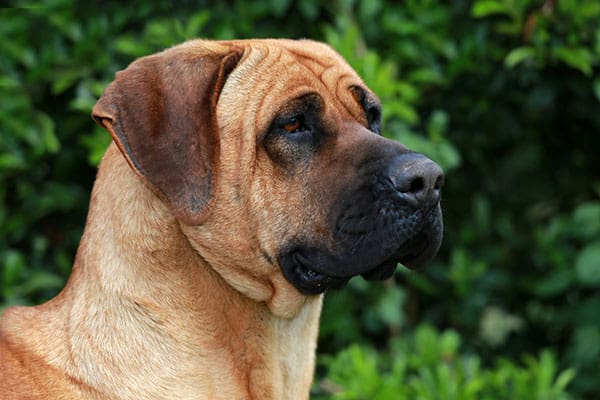 While the Tosa Inu is a beautiful, well-behaved dog in the right hands, it’s aggression and behavioral issues can be exacerbated by the wrong owner.

With its immense size, stamina, and strength, a Tosa Inu that attacks is a devastating problem. Unfortunately, this has led to reservations about the breed.

In the United States, Tosa Inu are not yet officially banned, but they have been placed on the list of dangerous dog breeds.

If you bring a Tosa home, it could cause legal issues and problems keeping your home insurance. Furthermore, 14 countries around the world have banned the breed from entry, including Australia, Norway, New Zealand, Denmark, and the UK.

Even in Japan, there are mixed emotions about Tosas. Some breeders are doing their best to bring the dogs into a more positive light; but most breeders still breed Tosas solely for fighting. It’s sad that these beautiful dogs are used for such violence.

Maybe in the future, when the dog fighting stops, the world will see how incredibly loyal and docile they can be.

How Big Do Tosa Inu's Get? 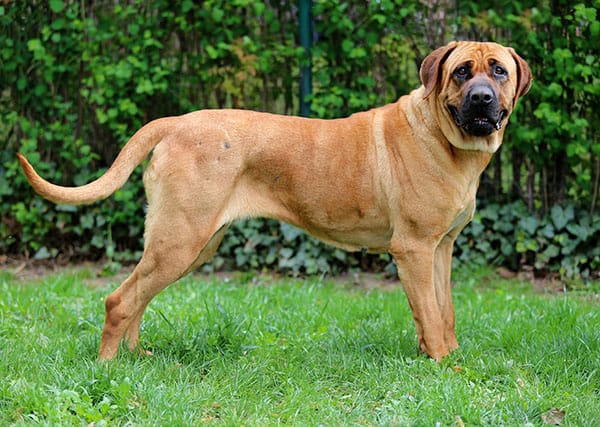 The Japanese Tosa is also referred to as a sumo wrestler - and for good reason.

Standing at a massive 20-32 inches tall and weighing in at 83-200 pounds, this breed is as large and intimidating as it sounds.

Keep in mind that the weight variances are because of dog fighting. Some Tosas are bred to be smaller and lighter while others are meant to be heavyweight - just as with boxing weight classes.

Furthermore, US-bred Tosa Inu are often brawnier than Japanese Tosas. The largest Tosa's are the coveted the most from overseas importers.

Obviously, the size and mass of the Tosa Inu has put limitations on its health and lifespan.

Like most large breeds, the Tosa Inu has a life expectancy of 10-12 years.

Physical Characteristics of the Tosa Inu

The Tosa Inu looks nothing like other indigenous Japanese breeds. You won’t see an ounce of Akita or Shibe in it! Except maybe in those deep brown eyes.

Instead, the Tosa Inu looks more like a Mastiff as it has a large, broad skull; a square muzzle; and small, slender ears that hang on either side of the head.

Their bodies are overwhelmingly muscular yet lean.

Visually, they look sturdy, agile, and tough. Their dense, short coats come in fawn or red coloring. Sometimes, they have red or white markings.

Temperament of the Tosa Inu 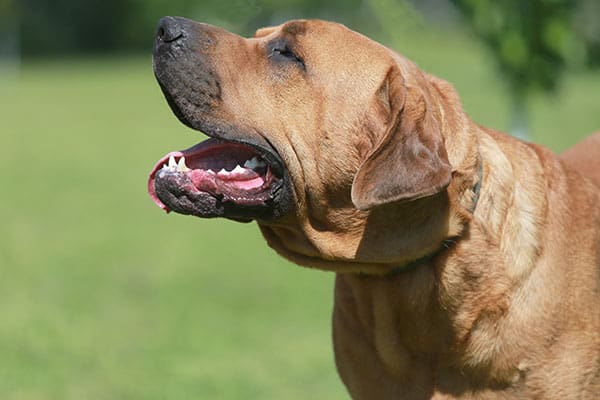 Once you get beyond the size and ferocity of a Tosa Inu, you begin to see the breed for what it really is—docile and intelligent.

Not everything about the Tosa Inu is scary or deserving of negativity. As mentioned earlier, the Tosa Inu requires the right type of owner and needs to be socialized and with a loving family.

In the best and most nurturing environments, these dogs are reliable, stable, and loyal.

They require a calm and soothing presence for training. You cannot bully this breed and expect results.

Keep in mind that you need to show this breed that they should respect you, not fear you. And when they do respect you?

You earn yourself a lifelong partner and guardian. Fearless and protective, Tosas form deep, lasting bonds with their humans.

Should their master pass before they do, Tosas are known to become deeply depressed.

Tosa Inu With Other Dogs and Children

Due to their breeding and background, the Tosa Inu is best when they are the only dog in the family.

They do not have the "domesticated" genes that urge them to seek out companions, and so they need to learn how to coexist with humans, children, and other dogs.

Therefore, you should always begin socializing a Tosa Inu as soon as possible. The more exposure they get, the better.

Keep in mind that these dogs can be aggressive, especially when the person they wish to protect the most (you) is endangered.

For this reason, Tosa Inus should not be with families that have children. Tosa Inu do not startle easy, but they do not like rough play or being teased.

How Much Do Tosa Inus Cost?

The Tosa Inu is an incredibly rare dog outside and even inside of Japan.

If you were really interested in bringing a Tosa Inu home, then you likely would have to be in contact with either breeders in Japan or the handful of other Tosa Inu breeders in various parts of the world.

Tosas in Japan and the U.S. typically cost a few thousands of dollars depending on the breeder and the lineage.

Exporting dogs from Japan will add thousands of dollars to the final cost of a dog that is really meant for a particular type of owner deeply familiar with the history of the breed.

The Tosa Inu is a majestic breed, one that was crafted for battle.

The downside of their remarkable strength and intelligence is undermined by the potential for aggression, which is why many countries have banned this breed.

Yet, when raised with love and warmth, the Tosa Inu is an incredible companion.

Hopefully, this breed can be cast in a better light in the future so it doesn’t disappear forever.

Links to more info on the Tosa Inu: