A “Shee - bah ee - nuu” if you don’t already know is an ancient breed of dog from Japan. In fact, they are the national dog of Japan and considered to be a cultural treasure to the Japanese. 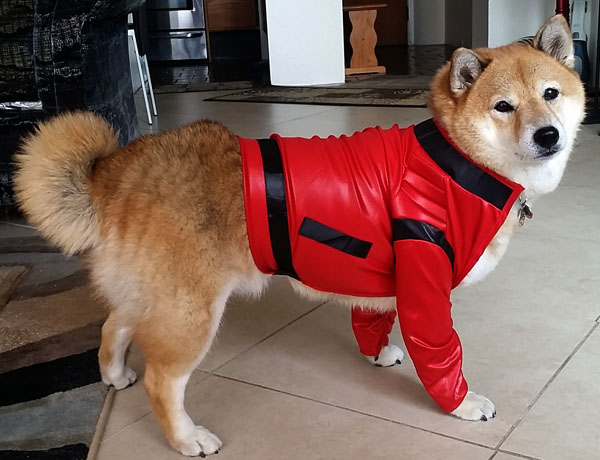 ​Although Shiba Inu’s haven’t called the United States home for very long - they have quickly found a way into the homes of millions of Americans via the Internet and social media.

All Shiba Inus - just as all dogs - are wonderful.

The ten Shiba Inus in this list are just “a bit” more famous than other Shiba Inu’s and we’ll explain why.

Here is one Shiba Inu that needs little introduction.

This unassuming, polite, and smiley Shiba has 2.4 million Instagram followers - the same amount of followers as skateboarding legend Tony Hawk.

Yet Marutaro didn’t have to do a single 360° to gain his massive following - he just had to smile and “be fluffy”.

This pint-sized photogenic superstar has graced the cover of Vogue Girl and has been featured on television commercials, multiple media appearances and numerous photo collections. He even has his own store in Japan.

Helping to Brighten a Tragic Situation...

Marutaro’s human Shinjiro Ono began posting photos of Marutaro after the deadly 2011 Japanese Earthquake and Tsunami, “with the hope of easing people’s anxiety, even a little bit,” he writes on Maru’s website.

The people of Japan responded and told him how Maru brightened up their days, so Ono continued to post photos of Maru 3 - 4 times a day.

Five years and millions of followers later, Maru continues to bring smiles and joy to the people of Japan and around the world.

Marutaro lives a good life. Period. And, as we browse through countless shots of him enjoying daily naps, delicious treats, fun outings in beautiful surroundings, and, of course, Shiba Inu toys galore - all with a smile on his face - we can only wish our life was so wonderful.

Shiba Inus are known to be aloof but famous YouTube Shiba Mari has the skills to take that aloofness to another level.Mari along with her owner (Youtuber Inosemarine) make a hilarious comedic duo - think Laurel and Hardy - thanks to Inosemarine’s creative and funny video skits and great comedic performance.

Known for being the ‘jerk dog’ by some, you can watch Mari close doggy doors in her owner’s face, reject kisses with a paw to his face, and even untie a rope meant to save her owner from drowning in a lake. [see below clip]

Thanks to Inosemarine’s creative storylines filled with prop gadgets and Mari’s flawless performances, many viewers have found themselves addicted to the short clips.To date, Inosemarine has created almost a hundred YouTube Clips with Mari and even offers a “best of” DVD for Mari’s die-hard followers.

Kabosu is the dog, or better, Doge who started the crazy Internet meme craze back in 2013. You know, the photos of the perplexed looking Shiba Inu and the silly childlike captions written in Comic Sans font. “Wow, such entertaining”, or “Much amaze”.

Although the Doge memes bring much laughter and smiles, the story behind Kabosu is actually touching and poignant.

The owner of Kabosu, Atsuko Sato, a soft-spoken kindergarten teacher rescued Kabosu from a puppy mill operation in 2008. Unfortunately, some of the 19 Shiba Inus from the rescue were not so fortunate and had to be euthanized​.

Atsuko posted photos of Kabosu along with her other pets, two cats, on her blog to promote the dangers of puppy mills and advocate for dog rescue.

It wasn’t long before she began seeing Kabosu on the Internet.

She at first found it unsettling to realize part of her private life so easily could be broadcasted around the world.However, she was definitely impressed at the lengths people go to convey their creativity using Kabosu as a template.

Interesting Tidbit : Kabosu got her name because her plump, round face looked just like a Kabosu fruit which is also plump and round.

More importantly, Atsuku is deeply grateful that the dog she saved has been able to rapidly spread her message about dog shelters and puppy adoptions - even though she still doesn’t quite get the Doge jokes...

Make room Jumpy, there’s more than one insanely talented dog on the block. Elee, a sweet Shiba Inu hailing from the U.K. knows how to perform a lot of tricks.

So much so, that in 2012, she and her owner Delphine Lamalle, took first place at the first ever Crufts Factor.

What’s the Crufts Factor? Well Crufts, based in the U.K. is touted as the World’s Largest Dog Show This 125-year-old organization has always been know to be a bit on the “stuffy” side with all its formalities and decided to lighten up the atmosphere a bit by creating a dog talent show based on the popular talent show, The X-Factor.

Shiba Inu’s have never been noted for their eagerness to please, much less fetch keys, play the bongo drums and walk backwards on walls which Elee effortlessly does on every command.

Began By Training For 5 Minutes Each Day

Owner Delphine, who moved to the U.K. from Switzerland started training Elee for five minutes everyday to prevent boredom in the young puppy.

According to Delphine the key to her training success was making the exercises fun, fun, and more fun!

Not All Shibas' Are Difficult To Train​.

That consistency has really paid off for Delphine and has helped to challenge the typical stereotypes of Shiba Inu’s being difficult to train and stubborn.

It all started here... We as human beings, collectively spent over 500 years of our supposedly valuable time watching a puppy cam.

And we are still doing it.​In 2008, a San Francisco couple, who anonymously refer to themselves as Mr. Feet and Mrs. Shoes, began monitoring their Shiba Inu puppies to keep a closer eye on all of their puppy shenanigans.

The couple, who bred Shiba Inus soon amassed millions upon millions of viewers who logged in merely for the chance to see Shiba Inu puppies being puppies.

These puppies provided viewers with a welcome escape from the complexities of “real” life and showed everybody how life should be - carefree, fun and just adorable.

As the six pups grew up, viewers continued to tune in and watch as the puppies began to find “furever homes”.

Fortunately for them, Mr. Feet and Mrs. Shoes had more Shiba Inu puppies and continued to stream them to the millions of viewers who loved nothing better than to spend countless hours of their lives watching cute puppies grow up to be beautiful Shiba Inus.

Interesting Tidbit: As of 2013, an estimated total of almost $30,000 had been raised for Shiba rescue organizations in connection with the Shiba Inu Puppy Cam.

Any Shiba Inu that has a salary higher than the President of the United States should obviously be included in this list.​

It started simply with Bodhi’s owners posting funny photos of dressed up Bodhi to Facebook.

The Right Combination of SkillsCombined with the two creatives [she a fashion designer, he a graphic designer] eye for fashion, photography skills, and Bodhi’s easy going posing abilities, the trio have developed the perfect eye candy formula to attract big names in the fashion industry.

Aside from Menswear, they have shot campaigns for Revlon, Swiss Army, Salvatore Ferragamo and countless others - having to turn down many offers.

​But underneath the all the layers of his expensive wardrobe - Bodhi is simply a Shiba Inu who loves being a dog. He loves peanut butter, bacon and of course, peeing on expensive, antique rugs.

Watching the nightly news has taken on a new level of adorableness with Shiba Inu superstar Shibao taking on the duty of lead news anchor. Shibao stars in a series of news broadcasts that serves as an advertisement for 7 - 11 Banking Services of Japan.

Tailored From Head To Tail, Shibao looks absolutely dapper in his exquisitely tailored suit. Personally, I don’t have much knowledge about fashion, In fact, I don’t really know or care to know what the difference is between a Dolce and a Gabbana, but I do know that Shibao really knows how to wear a suit.

I mean, he really rocks a suit - take note, Bodhi.​This handsome hunk of a Shiba takes his role as top news anchor - well, not very seriously.

The commercial spots also feature other Shiba Inus "working" in the studio. Often found dozing off between news clips or amusing himself by contorting his body in acrobatic positions,

Shibao nevertheless get’s the job done by making us tune in and watch the news.

Sadly, in 2011, he died at the incredible dog age of 26 years. Surrounded by his loving family of 26 years, Pusuke died peacefully in his sleep.

Happy and Healthy Until The End

The owner of Pusuke, Yumiko Shinohara stated that Pusuke was fine all the way up to a day or so before his death when they noticed that he did not have his usual hearty appetite.

Touchingly, Yumiko said that Pusuke waited for her to come home from an errand before peacefully dying with her at his side.

She states that she is so grateful to him for living such a long life with her.

​Good Food and Lots of Love

When asked about his longevity, Yumiko says that good food, lots of love, and regular vet visits helped keep Pusuke in top shape.

​Pusuke’s story and life gives Shiba Inu lovers much hope that they too, can enjoy their Shiba Inu companions for much longer than the typical Shiba Inu lifespan of 12 - 14 years.

If the glass window was not open, all visitors had to do was ring a “service please” bell and Shiba-san would eagerly jump up to the window and slide it open with her muzzle.

Her smile and enthusiastic tail wagging had brought many to the shop to meet her and purchase things they didn’t really need.

Such adorableness of course cannot be ignored and millions of visitors have watched her charming hospitality on YouTube.

Many visiting Japan have said that they got interested to visit Japan specifically because of Shiba-san , the fluffy 4-legged Shopkeeper

When not opening doors for visitors, Shiba-san enjoys resting in the store’s front display case usually with a green Japanese cucumber in the near vicinity. She loves munching on it.In late 2015, Shiba-san and her fellow shopkeeper owners retired from their many years of hard work and service.

Shiba-san of course, will be enjoying her retirement munching on cucumbers and being adored by all those near her.

There is plenty of room for more Shiba Inu Stars on Instagram. Meet Ryujii, a seven-year-old Shiba Inu hearthrob from Okayama, Japan.

This handsome and fluffy hunk has only been on Instagram for one year and already amassed over 40 thousand followers.​

This Shiba Inu is so ridiculously cute, that he has fans often sending him drawings and paintings​ of himself.​

Ryuji is a sweet boy who loves being photographed stretching, yawning, and just being too cute for words. His owners give him lots of love, treats, and walks to explore the towns in Okayama.

He has to live outside because he has a very strong sensitivity to chemicals / everyday cleaners and cannot be inside the house.