The Fat Shiba Inu And Why Dog Obesity Is Not Cute 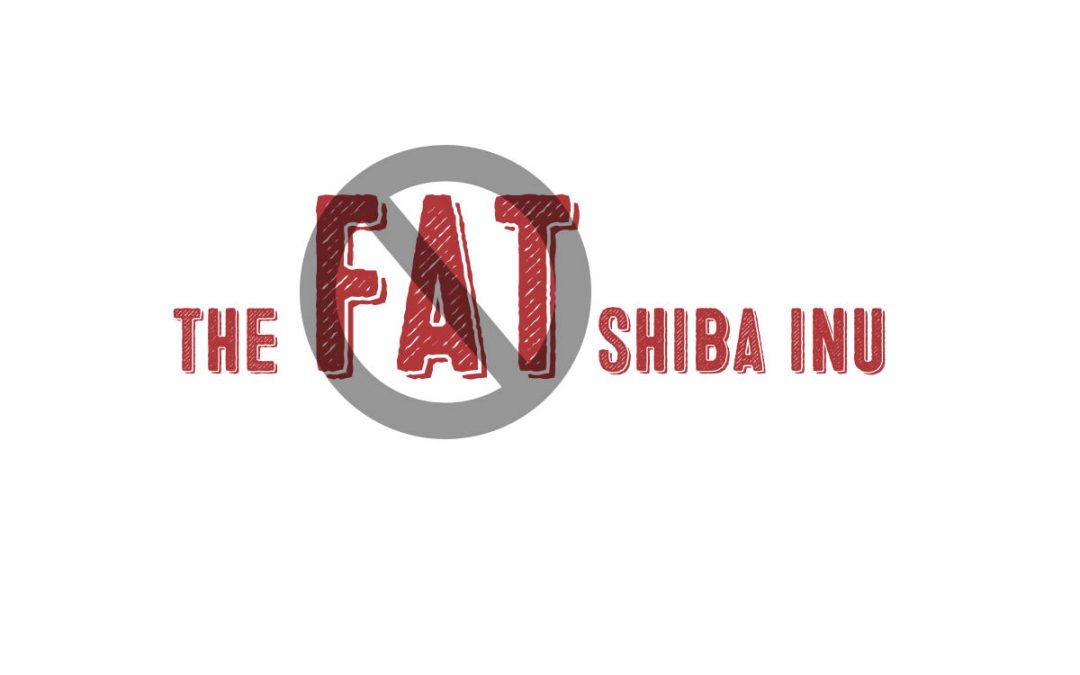 Seriously, how can anybody think an overweight and likely suffering living thing is "cute"?

And the worse part of it is that it's not even the Shiba Inus fault. It's all the fault of their unknowing owners who sometimes don't realize the seriousness of their actions or "lack" of actions.

Granted, many owners of course don't mean to purposely harm their dogs. But they need to understand that there are serious consequences of indulging their Shiba Inus in too much food and treats.

Additionally, many owners defend their actions by saying that they "just follow the directions on the bag". The bag directions are just rough "guidelines" and the actual proper amount to to feed can vary by 25% or even more.

According to the Association For Pet Obesity Prevention, pet obesity is one of the fastest rising health threats to our pets - but it also is the number one preventable disease.

So while we can't 100% prevent cancer, hereditary diseases, autoimmune diseases, etc  we CAN and MUST prevent pet obesity.

This fat Shibe trend literally "burst" in popularity when pictures of Cody, a morbidly obese Shiba Inu began circulating around the Interweb.

This poor Shiba Inu could barely move, walk, and even breathe. Thankfully a new owner adopted Cody from his previous owners who were old and probably didn't know any better, and put him on a strict diet and exercise regime.

Thankfully, Cody lost the weight and is healthy again.

People seem to think that rolls of fat on their dog is cute.

Unfortunately, letting your dog eat whatever it wants and go without much activity to burn that food off is literally killing him/her with kindness. Those daily treats of love are only harming your pet in the long run.

I'd be this fat if I lived in HK. So many tempting food options here, pushing me towards gluttony! #doge #shibainu pic.twitter.com/B82b3SG6cW

The Harmful Effects of an Overweight Shiba Inu

According to findings reported by the Association for Pet Obesity Prevention (APOP), more than 45 percent of dogs are classified as overweight or obese. As of 2017, the number of adult dogs that are obese or overweight is 53%.

Many owners don’t realize that their animal companion is actually at an unhealthy weight. 22% of dog owners stated they thought their overweight dog was at a normal weight. 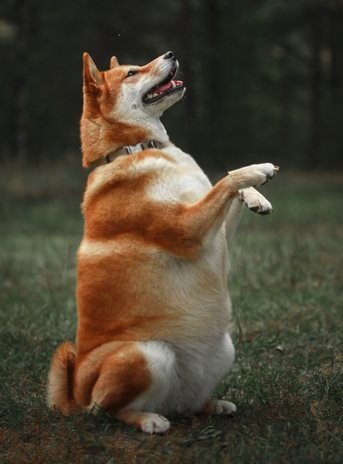 Just as overweight is becoming the new norm for humans, there is also a “fat pet gap,” which is normalizing obesity in companion animals by pet owners.

Veterinarians believe that there is a “direct correlation between childhood and pet obesity.”

According to the Purina Lifespan Study, obesity will take almost two years off a dog’s life. The longer your dog is overweight, the less of a lifetime he/she will have.

Unlike people, every single pound on your dog’s body is either going to maintain health or detract from it.

Being overweight puts significant stress on your pet’s musculoskeletal system.

In the past, fat itself was considered inert and not harmful in and of itself. However, new research has proven that fat is actually biologically active and secretes harmful and inflammatory hormones throughout the overweight dog's body.

This leads to damaging oxidative stress to bodily tissues.

Here are other problems that can occur:

If you don’t know if your Shiba Inu is just super fluffy or overweight, the best way to have your floofer’s health assessed is to take them to the veterinarian.

Between visits, though, you can visually and manually figure out if your pet weighs too much.

Regardless of the breed, you should be able to feel your Shiba Inu’s ribs without much fat over them.

Also, your Shiba Inu’s chest should be wider than his/her abdomen. There should also be a noticeable tuck-up from chest to stomach.

Should your dog be overweight, you won’t be able to see a defined tuck-up, waist, and no separation from chest and stomach. Other signs include noisy breathing, waddling, walking slower than normal, and more naps than usual..

The Story of Cody, the Overloved Shiba Inu

There are a number of studies out there about overweight and obese dogs who were released after being grossly neglected.

But perhaps one of the most inspirational would be that of Cody the Chubby Shiba Inu (although, he’s definitely not chubby anymore).

When Cody was adopted by his owners in 2014, he weighed an unbelievable 104 pounds. Ideally, a Shiba Inu of Cody’s size shouldn’t have weighed more than 30 - 35 pounds.

Cody was more than 50 pounds overweight.

For a medium-sized dog, this is a horrifying situation to be in.

Cody could barely move, let alone live a healthy life. Veterinarians feared that Cody would suffer from a fatal heart attack at any moment. One wrong move, and that would be the end of him.

However, Cody’s new family was able to get him down to the healthy weight recommended for the Shiba Inu breed. This effort, though, not months but years.

How did they do it?

The truth is that helping you dog lose weight is no different than how you drop a few pounds.

With healthy lifestyle changes that show up in a more nutritionally balanced, appropriately sized meals as well as more regular exercise, a dog can begin to shed their extra pounds to get back to their optimal weight range.

Yet, since dogs are not as self-controlled as humans, making sure your chubby companion is keeping up with these lifestyle changes falls on you and your family.

If you follow Cody’s Facebook page, you will see that even today his weight fluctuates. Cody’s just like any of us--struggling to keep the weight off and embrace a healthier lifestyle!

In other words, once your friend gets down to their healthy weight, you cannot go back to the original routine that got them fat in the first place.

The Fat Shiba Guide to Losing Weight for Good

Using Cody’s inspiring journey as well as some tips from veterinarians, you can help your fat floof get their weight in control and reclaim their life.

First, if you want to check out how Cody’s owners got him back to normal weight, you can check out their eBook, “Tips From Cody The Overloved Shiba Inu.” The story alone is heartwarming, but you also get access to insightful tips.

Always check with your veterinarian to make a healthy plan for your pet. Every animal is different, and there may be health complications to work around.

Once you have consulted with your vet, you can then begin to construct the most beneficial plan.

Next, incorporate the following knowledge into your pet’s weight loss journey:

In order to scoop the correct amount, refer to this:

Remember, the guidelines you read on the bag are just that - guidelines. It's up to you to constantly monitor and assess your Shibas weight and health.

If your Shiba is gaining weight, you must slowly lessen the portion of food you serve.

Also slowing down your dog's eating time, especially if they're voracious chompers will help keep them satiated. Try utilizing dog feeders that divide up the food in your dog’s bowl to keep them from wolfing everything down in 5 bites.

Like people, keeping a food diary for your dog is going to help you stay consistent with how much you are feeding him/her. It will also help you keep track of how much food they get in a single day.

Free feeding is one of the common reasons of overweight dogs.

Remember, if it smells good, your dog is probably going to eat it.

It's best to feed your Shiba two meals per day.

Put food down only at a certain time every single day. Give your dog about 15 to 20 minutes to eat their meal, and regardless of whether or not they have eaten everything, pick the bowl back up so they don’t have access to it later.

Ever take a look at how calories are in those treats you picked up at the pet store?

A study from the Cummings School of Veterinary Medicine at Tufts University examined the nutrition of various bully sticks and found that each contained between 9 to 26 calories.

This is a lot for a dog, especially when treated in bulk.

Though treats are often made with healthy ingredients, you have to keep in mind that “cheat days” and “dessert” don’t work on animals like they do for human beings.

Dogs need a balanced diet, including a regulated amount of calories, if you want to keep them at a healthy weight.

Avoid store bought dog treats, since those often use more ingredients than what is necessary and can have high levels of fat and sugar.

The same goes for chews. If you have to treat your dog, especially during training, be sure to use the correct training treats, which have minimum calories.

Another way to “treat” your dog is with more hands on activities, such as Doga (doggie yoga) and massage, brushing, and other play and exercise.

As long as your dog is having fun and is entertained, they won’t miss the extra food.

Get Moving - Both You And Your Shiba Inu 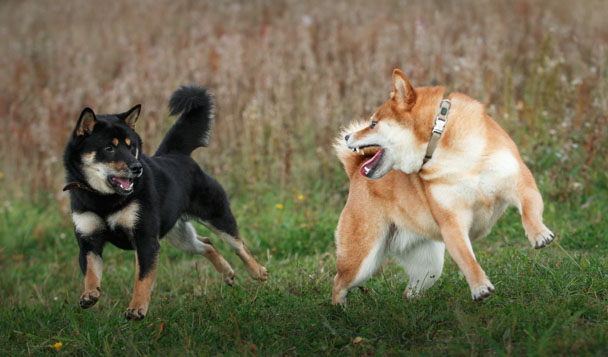 Being sedentary will just about kill anything, even sloths.

Therefore, you cannot just limit the amount of calories your dog is consuming and assume they are going to lose weight. You and your furry friend also need to get moving.

Not only is running around outside going to help your dog shed some anxiety and stress, it may also help you lose weight too!

It’s a win-win for everyone. 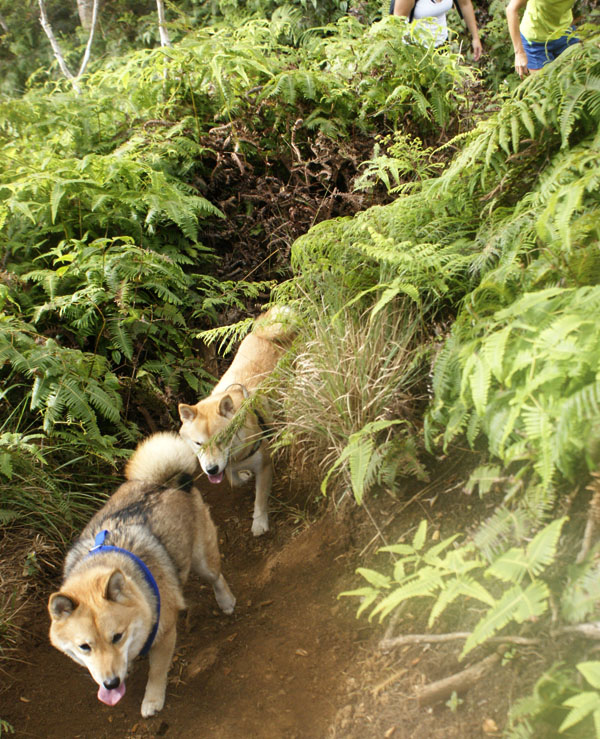 There are many activities that you can do, even when your Shiba Inu may be too heavy to do anything strenuous.

In the beginning, start out with low impact exercises. Here are some suggestions:

For the time being, avoid any training or tricks that require you to give a treat continuously.

Don't forgot to write down the activity and the duration of it in the food journal. That way, you can calculate a rough estimate of how much energy your Shiba Inu is expending throughout the day.

Make Sure Everyone is Cooperating

It is important to confirm that your household is going to work together to bring the dog’s weight down.

If you have a child that is sneaking treats to the dog, all of the effort is going to go down the drain.

Sit everyone down and discuss the reasons why being overweight or obese is bad for dogs and make sure they understand.

With everyone helping your Shiba Inu return to a healthy weight, you will begin to see results faster than if it was only your personal endeavor.

Similar to your own weight loss journey, keep an overweight dog on a regimented program is difficult.

Dogs love food and are often motivated by it, so it is quite challenging for pet partners to deny their beloved pets something that they enjoy.

However, you have to stay strong and not give into the begging and puppy eyes. Keep in mind the dangers of being overweight when you are tempted to give the good boy or girl a treat for working so hard.

Chubby Shibes may look like giant clouds of cuteness, but their health is at risk.

Fat animals shouldn’t be the norm, especially when their lives are shortened and they are living in pain.

Though helping your beloved Shiba Inu lose weight is going to be a challenge, walk the path together.

Devote yourself to excellent nutrition, exercise, and healthy treats.

Remember, an overweight dog is not a happy dog; so do what makes your dog happy and return them the healthy weight they deserve.