The Shiba Inu Klee Kai mix is a "designer" dog mix that has equal parts Shiba Inu and Klee Kai.

While we don't encourage the purchasing of designer dogs, we do provide information about Shiba Inu mixes to educate those who already have these dogs or are interested in rescuing one.

In fact, since many designer dog mixes are bred by unscrupulous backyard breeders and puppy mills, many of them end up in shelters across the country.

Shiba Inus are a Japanese breed of dog that many say resembles a fox. As the smallest of the breeds that are indigenous to Japan, the Shiba Inu was originally bred to be a small game hunting dog.

Over the years, however, Shiba Inus have transformed into primarily companion animals and are loved all across the globe for their striking appearance and unique temperaments.

The Alaskan Klee Kai, while often called and mistaken for “mini huskies,” is actually a small to medium sized breed of dog that was developed in the United States in the 1970’s.

As their appearance suggests, the Alaskan Klee Kai was in fact created to resemble a small husky, though they are very different from Huskies temperamentally.

While they don’t enjoy the same popularity as the full sized Husky, Alaskan Klee Kais are quickly becoming a very popular companion breed.

Physically speaking, the Shiba Inu and the Alaskan Klee Kai are somewhat similar, so what would happen if they two breeds were bred together? What would a Shiba Inu Klee Kai mix look and behave like?

Both the Shiba Inu and the Alaskan Klee Kai are highly intelligent breeds, and this superior intellect will undoubtedly be passed on to their puppies. They are also both friendly with their owners but have a tendency to be wary of strangers, at least initially.

Shiba Inus are generally a little more relaxed than Alaskan Klee Kais, which have a tendency to be a little bit high strung. Both breeds are playful and curious, but Alaskan Klee Kais are easier to train than Shiba Inus because they do not possess the typical Shiba Inu same stubborn streak.

Both breeds have a tendency to be “one person dogs,” in that they bond intensely with their primary caregiver. Shiba Inu Alaskan Klee Kai puppies will be very smart, very loyal and loving with their human families, and will be quite energetic and equipped with a very strong prey drive.

Neither breed is known for being especially patient with children, and Shiba Inu Alaskan Klee Kai mixes will be no different.

Physically speaking, Alaskan Klee Kais and Shiba Inus are actually pretty similar. While they hail from two totally different parts of the world (Japan and Alaska respectively) they both have physical characteristics that are typical of Spitz breeds: the curled tail, upright triangular ears, and foxlike muzzles. 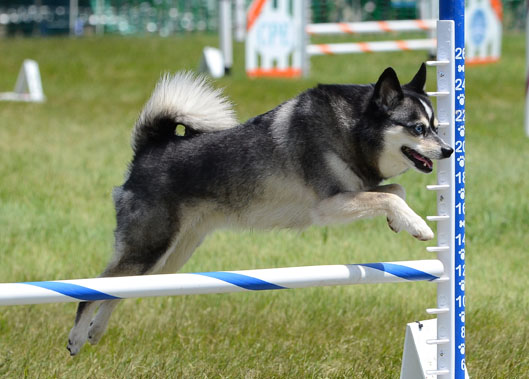 Alaskan Klee Kais are slighter than Shiba Inus, and rarely weigh over 15 pounds (the breed standard indicates that anywhere from 9-15 pounds is acceptable.)

Shiba Inus look a bit like burlier versions of the Alaskan Klee Kai. Shiba Inus have plusher coats and a more solid frame and can weigh up to 22 pounds when fully grown.

While Alaskan Klee Kais only come in three colors (grey and white, black and white, and red and white), Shiba Inu coloring is a little more nuanced. Shiba Inus tend to be more richly colored, and can come in a variety of shades of red, brown, black and cream.

While the coloring of individual Shiba Inu Alaskan Klee Kai pups will depend entirely on the colors of the parents, it’s likely that the mixed puppies will be a mix of white and some other color, such as grey, black, or red.

Alaskan Klee Kais are prone to a totally different set of issues, including thyroid problems and autoimmune diseases.

When it comes to mixed breeds the vast majority of problems arise when both parent breeds are susceptible to the same genetic illnesses, as the puppies have a much greater chance of inheriting them if the genes are present in both lineages.

However, don’t let that fool you- while many Shiba Inu Alaskan Klee Kai puppies will be totally healthy there is also the chance that the puppies will inherit problems from both parent breeds.

Mixing the two breeds together is no guarantee of superior health, and there are really no health reasons that justify breeding the Shiba and the Klee Kai together.

Both the Alaskan Klee Kai and the Shiba Inu are very special breeds, created thousands of miles and hundreds of years apart for very different reasons.

While the Shiba can trace it’s ancestry back to imperial Japan, where they were used primarily as hunting dogs, the Alaskan Klee Kai is the smaller descendent of arctic working breeds. While they both have found their ways into our hearts and living rooms as companion animals, they both retain some of their historical behavior characteristics and are two very different breeds.

Because they are similar in size and physical features, mixing the Shiba Inu and Alaskan Klee Kai may sound harmless enough. But in fact, the opposite is true! Both breeds have been carefully selected and bred over the generations to be exactly what they are, both physically and temperamentally.