The Shiba Inu, also known as the Japanese Shiba Inu, is a medium sized breed of dog. The descendent of the indigenous dogs of Japan, whose history spans far beyond human record keeping, these independent and feisty dogs are the smallest breed to originate in Japan.

Shiba Inus , while originally bred to be hunting dogs, are now mostly kept as pets. Their somewhat unusual temperaments and foxlike features make them appealing to a great number of owners, and they have become very popular all over the world in the past fifty years or so.

Unlike the Shibu Inu, the Maltese was bred simply to be loved. This ancient breed, which hails from the Mediterranean basin, was bred to be the pampered lap dogs of European nobility.

True to their nature, Maltese are also known as “the Roman Ladies Dog.” White and petite, the earliest visual record of a purebred Maltese can be found painted in an ancient Etruscan amphitheater in the town of Vulci, which can be found in modern day Italy.

Bred for sweetness and docility, the Maltese couldn’t be more different than the spunky and independent Shiba Inu! So what would a Shiba Inu Maltese Mix be like? 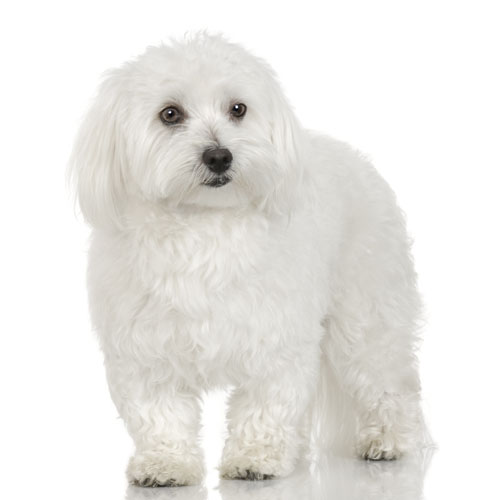 ​Personality wise, the Shiba Inu and the Maltese could hardly be more different.

While Shiba Inus have retained the pluck that was necessary to make them good hunting dogs, along with their independent and almost catlike personalities, Maltese are docile, cuddly, and very affectionate.

Maltese were bred to be companion animals. Unlike many breeds of dog that were originally bred to help human beings with day-to-day life (hunting, search and rescue, guarding, etc.), Maltese were bred specifically to be the loving companions of their masters. They are affectionate, warm, and playful.

Shiba Inus are a little bit different. While they are often extremely devoted to their owners, they are often reserved in the presence of strangers and take a while to warm up. They are extremely intelligent and independent and tend to bond to one person.

Shiba Inus are mediaum sized dogs which can grow to weigh between 18 and 22 pounds, and can reach anywhere from 13 to 17 inches tall at the withers (shoulders.)

Maltese are significantly smaller, with the larger males rarely weighing more than 8 pounds. They are very small in stature, and generally are between 8-10 inches tall at the withers.

As far as physical appearance, Shiba Inus come in a variety of stunning colors (from red to gold and black), which is in stark contrast to the Maltese’s’ pure white coat.

Shiba Inu Maltese Mix puppies will never be pure white, as the color genetics of the Shiba will overpower the snowy coat of the Maltese. The exact coloring will depend on the coat color of the Shiba Inu parent.

Shiba Inus have plush coats, while Maltese have long, silky hair (not fur!) A Shiba Inu Maltese Mix will have longer hair than the Shiba Inu but it will be thicker and coarser than the Maltese.

Shiba Inu Maltese Mixes will fall somewhere in the middle of the two breeds as far as size, and will grow to be anywhere from 10-15 inches tall at the withers and will weigh between 12-15 pounds.

The Shiba Inu and Maltese, when they are purebred, are susceptible to a variety of different health issues. Eye problems, dental issues, and liver shunts are the most common in Maltese, the last two due partially to their small size.

While Shiba Inus are generally more robust than the petite Maltese, they are also prone to eye issues, and can also have issues with hip dysplasia and patellar luxation (which is a problem in their knees when the kneecap can become dislodged.)

It’s worth noting that genetic health problems are a little bit like the lottery, and this is especially so with mixed breeds.

While some Shiba Inu Maltese Mix puppies will grow up to be totally healthy and will never suffer the issues common in either parent breed, some puppies may suffer from a variety of health issues found in both Shibas and Malteses’.

The best predictor of overall health is the health of the individual parents, and mixing the two breeds together is no guarantee of a healthier dog.

Shiba Inus are highly prized and beloved for their peculiar temperaments, physical beauty, intense devotion, and standoffish natures. Contrarily, Maltese are cherished for their loving dispositions and tiny size.

So, mixing the two breeds together doesn’t make much sense. If you want a snuggly dog that will get along with everyone and be indiscriminately loving, a Shiba isn’t the right choice for you – a Maltese would be better! On the other hand, if you want a dog that will be devoted to you yet independent and spunky, a Shiba would be a better option.

If you are looking for a breed that falls somewhere in the middle, there are tons of breeds to choose from! Diluting the spunk of the Shiba by adding Maltese genes is the wrong way to go about it, just as making a Maltese larger and more colorful by adding a Shiba Inu seems a little silly.

Shiba Inus and Maltese are so different and special in their own ways. It’s better to appreciate the two breeds separately, as they have both been created over hundreds if not thousands of years to be exactly who they are.