Differences Between a Shiba Inu And a Red Fox 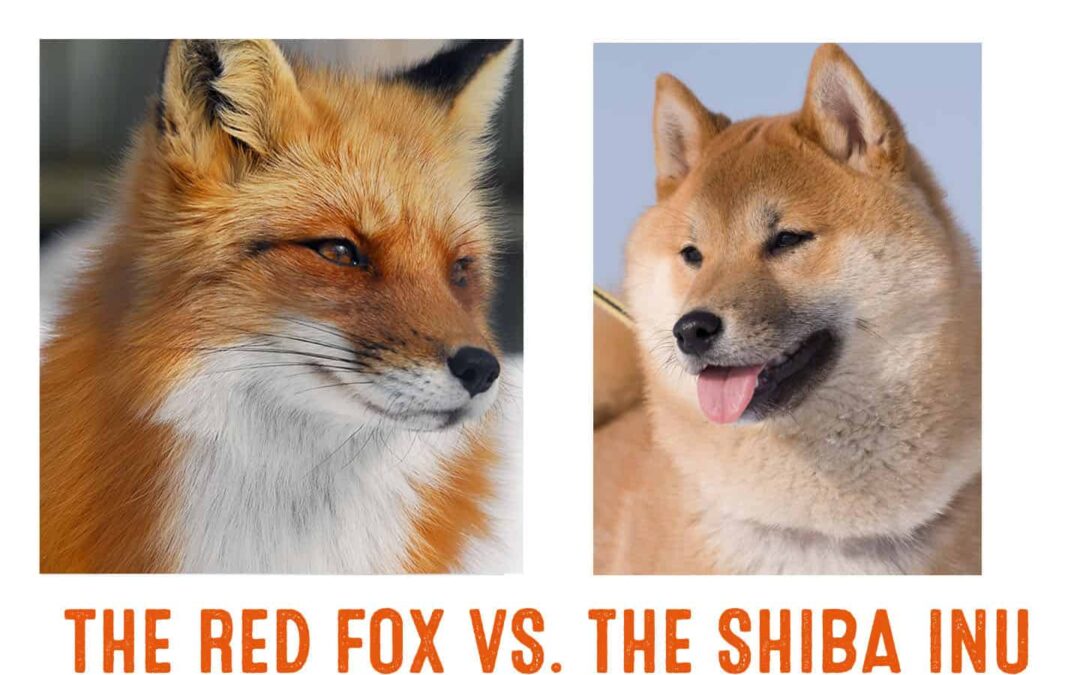 Any Shiba Inu owner can tell you how many times others have asked if their dog is a fox.

Or, exclaim, "Your dog looks JUST like a fox!"

But believe me, they are very different. Read on to learn more.

Foxes are part of the Canidae genus, the same scientific classification that encompasses domesticated dog breeds, wolves, jackals, dingoes, and any other type of dog-like mammal.

Foxes are omnivorous and are slightly smaller in build than a medium-sized domestic dog.

Foxes dwell on every continent except Antarctica, and they have various evolutionary adaptations to help them thrive in a number of climates.

Red foxes are highly vocal, known for their cunning hunting techniques, and having a characteristic hunting “pounce.”

Shiba Inus were bred by the Japanese to be small game hunters. Although not used for hunting now, Shibas still have a high prey drive but probably not as good "pounce".

The scientific classification for the Shiba Inu is canis lupus familiaris. This classification is shared with the Siberian Husky, Akita, and Samoyed, to name a few.

- Slightly longer than they are tall.

- The coat is a thick, double coat that sheds year round but blow coats twice.

- Colors: red, cream, black and tan, and sesame (red fur tipped with black). There is also the “urajiro” pattern which is visible on the cheeks, muzzle, chest, inside of the ears, and on the throat. 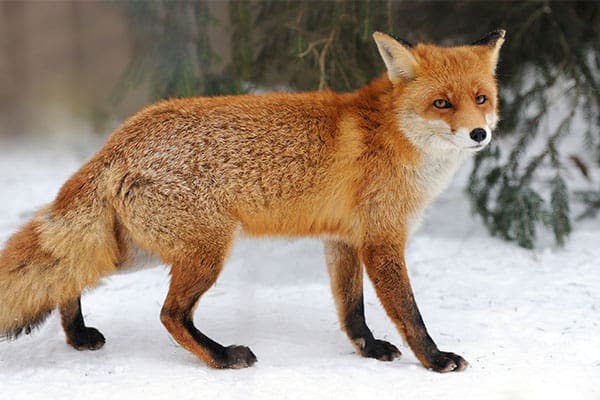 - Reynards (male foxes) have a general weight of 20 pounds. Vixens (female foxes) usually weigh around 15 pounds. Both sexes are longer than they are tall.

- Although the red and white coated red fox is the most well known - other color variations exist including Grey, blackish brown, silver, amber and platinum.

- Northern red foxes have a relatively long coat - particularly during winter. Their coat is soft, silky and dense.

Detailed information about red foxes can be found on her﻿﻿e.

Calling a Shiba Inu a fox of a dog or a fox lookalike is a misrepresentation of both animals. Yes, the Shiba Inu breed shares common facial features and expressions with the red fox, but on a genetic level, these species are not connected at all.

Red foxes may be in the canidae genus, but they are biologically different and do not have the same domesticated dog like behaviors - like being submissive and attentive to humans. What makes a dog a dog is not present in foxes. 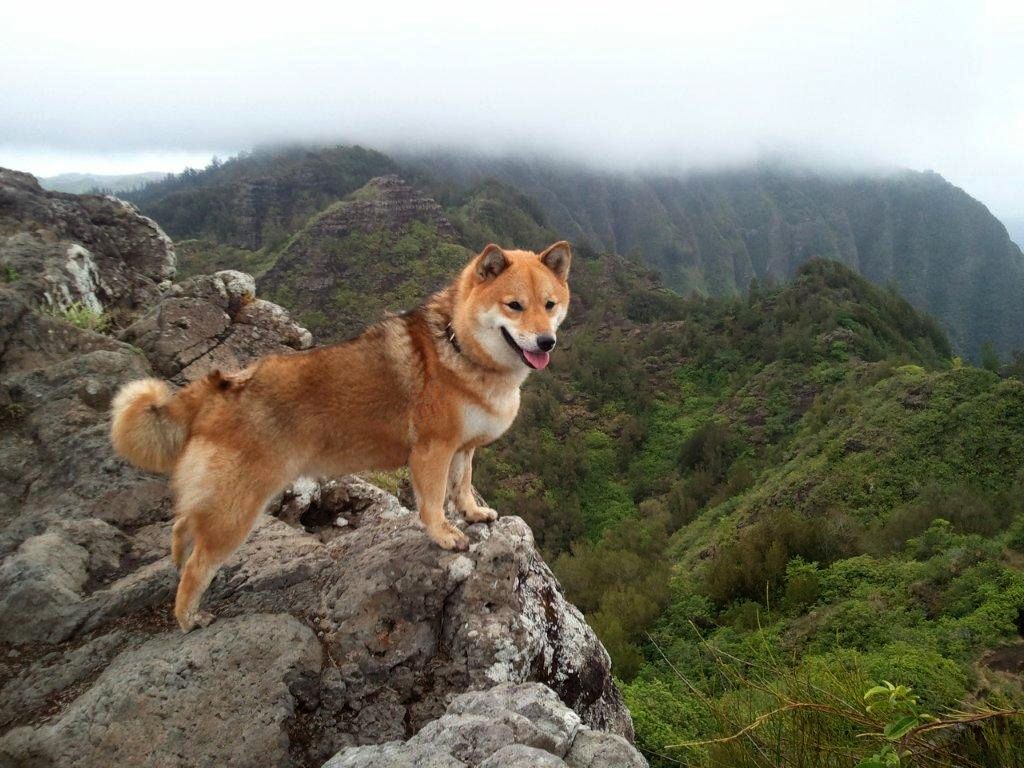 Shiba Inu do like to hunt small game like red foxes. Since Shiba Inu are also rather cunning, and they can “outfox” their owners by escaping from tethers and fenced-in yards if a proper eye is not kept on them.

Both Red foxes and Shiba Inus display “catty” behaviors, such as wanting to curl up on your lap or racing around the house with random bursts of energy.

Both the red fox and Shiba Inu can be mouthy--yelping and howling given the right stimulus. The red fox has a wide vocal range and can produce sounds in five octave levels.

Red foxes produce different sounds for different types of communication such as calling, warning, or provoking.

The Shiba Inu also has an interesting vocalization called the Shiba scream. This scream is often a way for the Shiba Inu to express discomfort, anxiety, or excitement.

Both red foxes and Shiba Inus retract their ears back when they are displaying submission. When Shiba Inus do this, the term "airplane ears" is often used to describe the retracted ears.

Despite some of these similarities, the Shiba Inu is a domesticated breed of dog that has been around for hundreds, if not thousands, of years living alongside people. The red fox is a wild animal.

Sure, you can have a tamed “pet” fox, but you cannot take the wild out of it. Taming is different than domestication. Lions can be tamed too, but they are still unpredictable. 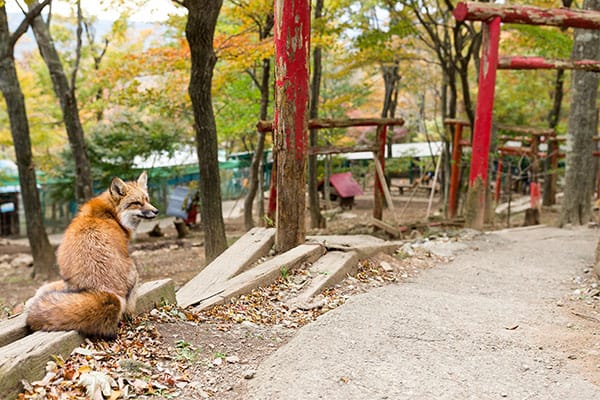 Can Red Foxes Be Kept as Pets?

Around the world, there are incidences of people keeping red foxes as pets. Those YouTube videos of red foxes can be adorable but there are some things to keep in mind about red foxes:

- They are VERY difficult to train -- red foxes will do their own thing, how they want to.

- They stink -- some people say they smell like a skunk, others find them to be particularly musky. The smell comes from a gland and also from their urine, so it is not something that can be easily removed.

- They are skilled escape artists (just like Shiba Inus)

- Red foxes have special dietary needs; and they can very destructive.

Red fox owners state that owning a red fox is time consuming and requires a lot of work. You would basically need to "fox-proof" your entire house or set aside a large, fox only area for a red fox to live. 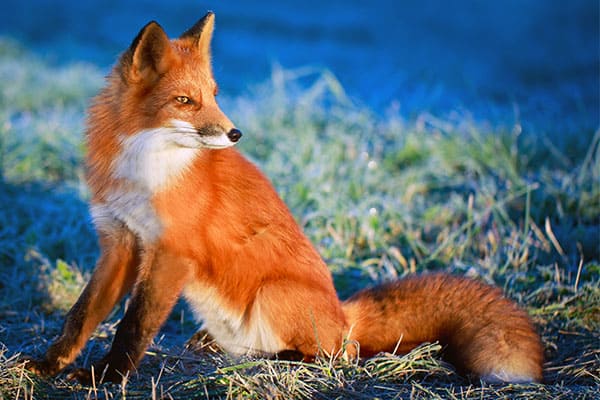 Where to Meet Red Foxes Up Close And Personal

Rather than bringing a fox into your home, seeing them in their natural habit or in a sanctuary as close to the wild as they can get is quite a treat.

In Miyagi, Japan, on the base of Mt. Zao (about an hour drive from Sendai city or a quick jaunt from Tokyo via Shinkansen) is Zao Fox ﻿﻿﻿﻿Village﻿﻿﻿﻿.

Far from the influences of human contact, over 100 foxes of various species live in harmony on these enclosed grounds.

The population is generally made up of the Japanese red fox, but there are also rare silver foxes, platinum foxes, blue foxes, shadow foxes, and even cross breeds.

Another thing you may be lucky enough to see are baby foxes if the breeding season was successful. 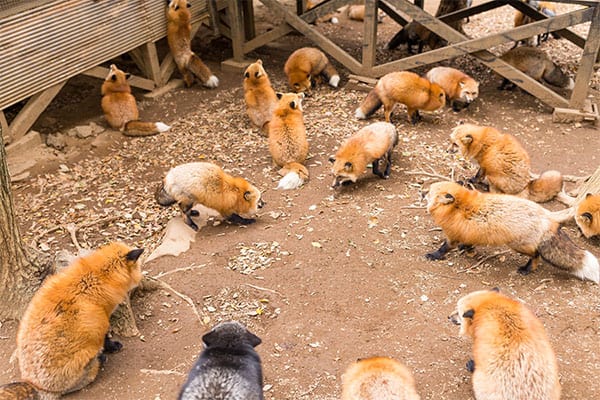 Visitors are welcomed to move throughout the grounds, either safely behind fences or amongst the foxes in some enclosures.

Entering through the gates, you will soon realize that the Shiba Inu and the fox are actually very different creatures when visiting Zao Fox Village.

You are transported away from dogs and brought into the realm of the trickster.

Not only are most of the foxes undomesticated, many of them will gladly take anything that is dangling from a person, like cellphones, camera straps, and purses.

Usually, they think these are food; so rather than forking over your valuables, you can buy small packets of treats or hot dog pieces for 200 yen to give to the friendly ones that approach.

Even though it will be really cold, it is highly recommended you go in the early winter to watch the foxes play in the snow, lounge on the benches made for them, and romp around with one another.

Also, during the humid Japanese summer, thanks to the natural dwellings for the foxes, it smells pretty bad. For those who cannot tolerate smells, winter will definitely more enjoyable.

You may notice that many “Spitz” breeds will feature physical characteristics that look very much like fox characteristics. Of course, the Shiba Inu is a part of the Spitz family, so you may also find that many of these breeds also look something like a Shiba Inu!

1. Finnish Spitz -- a medium-sized, non-sporting group dog that has an unusual red top coat, triangular ears, and boxy chest. When they “point,” they look very much like foxes.

2. Dhole – The Indian wild dog or also known as the “red fox dog.” These wild dogs look very similar to African wild dogs and can bring down prey over five times their size, hunt in packs, and are generally not very friendly towards humans.

3. Indian Spitz -- this breed looks like a cross between the German Spitz and Shiba Inu. The colorations of the coat tend to be brighter.

4. Alaskan Klee Kai -- though these dogs look more like miniature huskies, the red and white coat variation looks very similar to a fox. They also have narrow bone structure, giving them the sleek appearance of a fox.

5. Korean Jindo Dogs -- from behind, the medium, slightly muscular build of this breed can easily be mistaken for a fox. However, if you look to the tail, you will find that it is much thinner.

6. Volpino Italiano -- these little dogs can easily be mistaken for the arctic fox.

7. American Eskimo Dog -- same as the Volpino Italiano, the Eskimo dog as a fluffy white fur and pointed ears that look similar to the arctic fox.

8. Icelandic Sheepdog -- an ancestor of the Shetland Sheepdog and Welsh Corgi, this medium-sized Spitz breed sports an orange and white coat, as well as fox-like face and snout.

Though the Shiba Inu is often called a fox, both creatures are biologically different. That is not to say that there are no similarities, because there are indeed many commonalities that Shiba Inu and red foxes share. These two animals are intelligent, agile, and independent.

Both red foxes and Shiba Inu love fun and games, can be very loyal and loving towards those who take care of them, and also look similar to one another.

However, the main difference is that the Shiba Inu is a domesticated dog, bred for many years to live alongside humans. 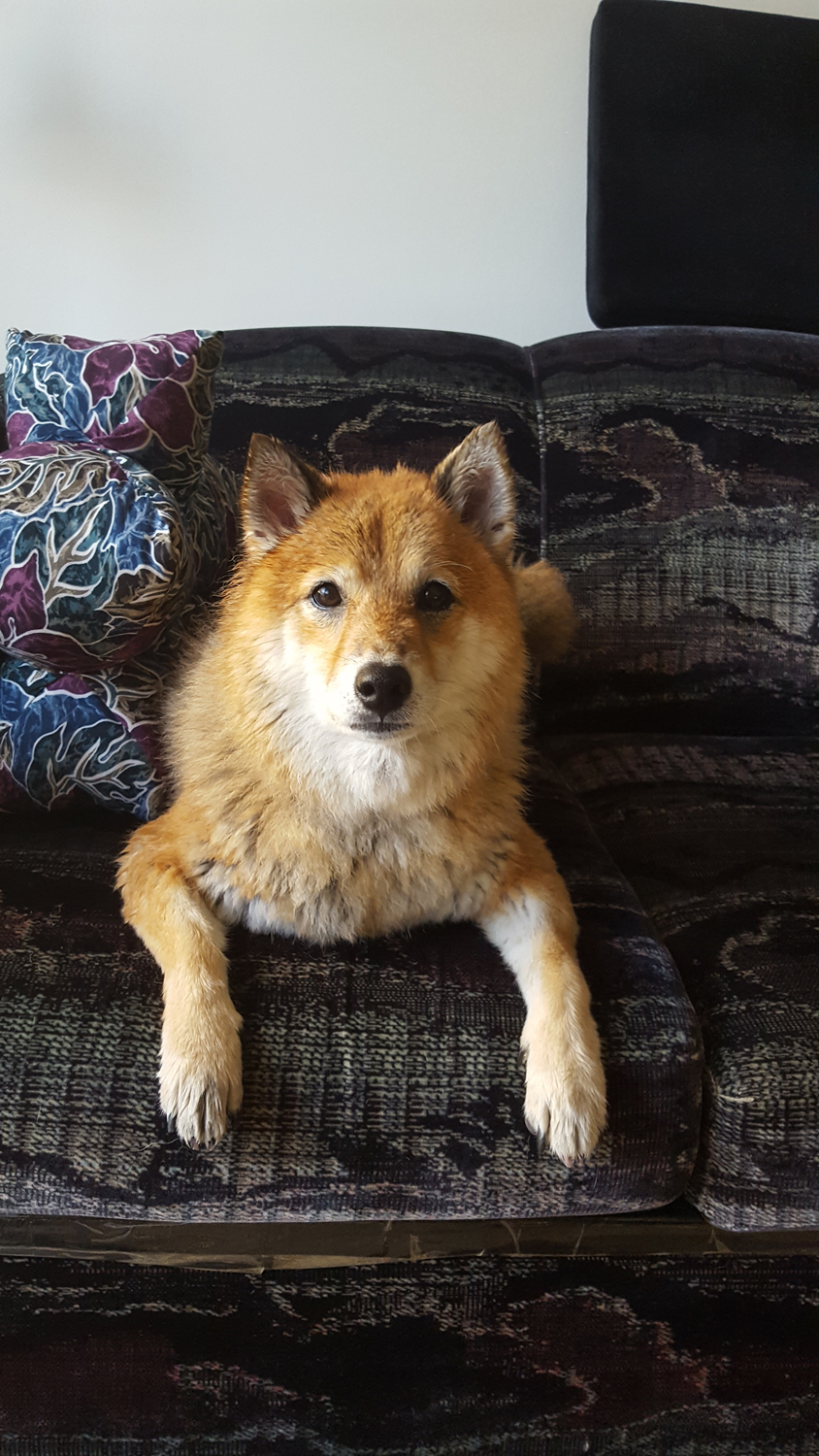 Conversely, the red fox is a wild animal that can be tamed but is not ideal as a companion--though some will argue otherwise--and we certainly do not condone keeping a wild animal as a pet under any circumstances.

So if you want a fox-like dog, get a Shiba Inu or look at one of the many dog breeds that look like their red fox cousins!